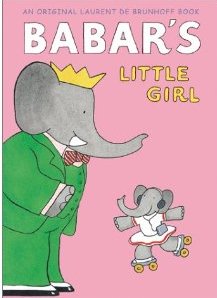 This year, popular French children’s book character Babar the Elephant turns 80 years old. Created by Jean de Brunhoff (and continued by his son, Laurent de Brunhoff), Babar’s had numerous books about him and his family published over the decades, with a new one coming out this fall (“Babar’s Celesteville Games”; an adult Flora, one of Babar’s daughters, falls in love with an athlete visiting Celesteville for an Olympics-like event).

While my exposure to Babar has been mainly through the Nelvana produced animated TV series of the late 80s/early 90s (versus the original books), I’ve always enjoyed the adventures of Babar, Celeste, and company. I’m not overly thrilled by the current TV spin-off of Babar (“Babar and the Adventures of Badou,” about his grandson Badou), however, for the reasons listed below:

CBS ran a segment on “CBS Sunday Morning” recently about Babar’s anniversary, along with the history of the character (and an interview with Laurent de Brunhoff). There’s also this USA Today article about de Brunhoff and Babar. Of course, others have written plenty about Babar as well, including the usual discussions on whether or not Babar is really a French imperialist fantasy and/or racist.

Some of the earlier books in the series do have some ethnic stereotypes (like many books/movies/other media of the time, unfortunately), such as stereotypical Black cannibals in 1949’s “Babar’s Picnic.” Famed African-American author Toni Morrison persuaded de Braunhoff (who now regrets including such depictions in his earlier books) to let the book go out of print in the 60s. Along with this, according to a New York Review of Books article, 1965’s “Babar Comes to America” depicts an integrated American society.

As for the French colonialism elements, I suppose the original book (about how Babar brought civilization to the elephants) could be seen by some as such, though I think the Nelvana animated series offered convincing reasons the elephants (and other jungle animals) took to becoming civilized: better protection against the likes of the hunter that shot Babar’s mother, and similar poachers; plus, the jungle animals liked the idea of having clothes, books, cars, etc., and decided on their own to adopt them for themselves, without being pressured/forced into such (versus the repressive results of real-world colonialism).