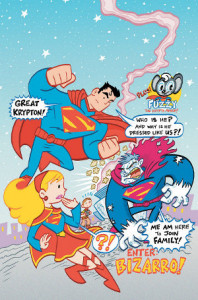 Halfway through the year, here’s what’s of interest from DC Comics for June 2012. Full solicitations may be found here.

The big “Before Watchmen” series of comics are out this month. While the writers involved are talented (Len Wein, etc.), it still sounds pointless to me. I imagine it’ll be like “The Kingdom” (the followup series of books based on “Kingdom Come”) in the late 90s…a few decent stories, but eventually forgotten.

Yes, that’s Jay Garrick’s new costume…unfortunately. And yes, he does look like Ant-Man. Regarding “Earth Two,” Mister Terrific (fresh from his recently-axed title) appears in this issue. Also regarding this title, I notice DC’s spelling out “Earth Two” in this solicitation (still without a hyphen, annoyingly enough) instead of writing “Earth 2” as previously seen. Maybe “Earth Two” is more easily trademarkable as a title than “Earth 2” (given the old 90s TV show of the same name)?

The big summer storyline for “Action” is Superman being hunted by new villain “Nimrod the Hunter.” I know there’s a historical/Biblical meaning behind the name and concept, but still… “Nimrod?” Guess DC didn’t want to bring back Terra-Man…

Over in the Johnny DC side of things, Bizarro turns up in this month’s “Superman Family Adventures,” as does Fuzzy the Krypto-Mouse.