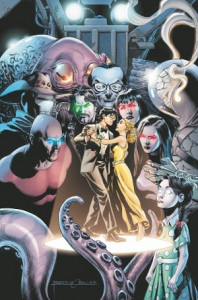 The end of the year is finally here, as far as comic solicitations are concerned. Here’s what’s of interest from DC Comics for December 2012.

Morrison’s run on “Action” is almost at an end; his last appearance in this title is in January’s issue #16.

The solicit for “Earth 2” implies in the “New 52,” Mister Terrific‘s not originally from Earth-2 but from Earth-1, or “our universe,” or whatever the mainstream Earth is being called. Not that I care anymore, but why show him as such, when the original Mister Terrific’s a Golden Age/Earth-2 character in the original comics anyway? (Of course, the original Earth-2 had a high-profile African-American superhero during its Golden Age, the retroactively-revealed Amazing-Man…)

DC’s putting out a tie-in comic to the upcoming CW series “Arrow.” “Arrow” is based on Green Arrow, the archery-themed superhero and longtime JLAer. For CW fans, and assuming the show becomes successful, it should be a nice companion book with the “Smallville” title.

This month’s Showcase volume is a sixth entry for the original JLA title, collecting various early 70s storylines, including the “Crisis on Earth-X” JLA/JSA teamup. For those unfamiliar, this team-up involved a trip to “Earth-X,” a parallel Earth that housed most of the old Quality Comics characters who, later revealed in the 80s, had moved from Earth-2 to Earth-X to stop that world’s prolonged-into-the-70s World War II. Quality’s the Golden Age company that published stories about (among others) Plastic Man. (Plastic Man did have a non-Nazi-fighting Earth-1 counterpart, as shown in his 70s “Adventure Comics” run and a few guest appearances…)

In the kid-friendly side of things, Scooby-Doo this month features a Hanukkah story. The first “Green Lantern: The Animated Series” trade paperback is released, while the Superman Family battles an alien threat with their powers. Sounds like it’d make for an entertaining “played straight” story in the regular books… or the pre-New 52 books, anyway.