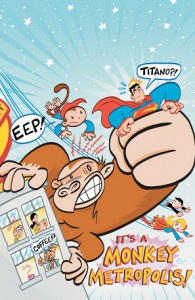 Here’s what’s coming out for August from DC. Full solicitations may be read here.

Obscure 80s DC heroine Looker’s being rebooted for this month with her own new ongoing comic, as well as 40s superheroes Phantom Lady and Doll Man. Doll Man, a doll-sized superhero that fights crime, is now Phantom Lady’s sidekick who’s a redhead with a beard (he used to be clean-shaven and was brunette).

Speaking of 80s comics, “Amethyst, Princess of Gemworld” is being collected this month for a “Showcase Presents” volume. Amethyst is about a teenage girl who discovers she’s really an orphaned princess from “Gemworld,” a fantasy-type alternate dimension, and possesses various magical powers. Like too many other comics from DC, it originally had wide appeal to younger readers (especially female readers), but was made darker in tone in recent years. Since Cartoon Network’s “DC Nation” plans on airing Amethyst shorts in between ad breaks, maybe DC should consider reviving Amethyst, given the popularity Disney’s having with its “Disney princesses” line.

In the kid-friendly line (not sure if it’s still called “Johnny DC”), Superman Family Adventures sees the Superman family versus Titano, the Super-Ape. Titano’s a long-running minor Superman foe, first introduced in 1959; he’s basically King Kong with (in traditional versions) the ability to emit Green Kryptonite vision from his eyes. At least he’s alive here; the “New 52” recently had its version of Titano used as cannon fodder.

“Looney Tunes” looks like it’s taking a cue from “The Looney Tunes Show” (Taz as Bugs and Daffy’s pet “dog”), though sure here it’ll be much funnier.