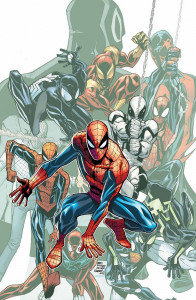 Here’s what’s of interest from Marvel for August 2012. Full solicitations may be found here.

Lots of Spider-Man this month, geared toward his 50th anniversary this year, as well as cashing in on any remaining popularity his movie will still have by this point. “Amazing” #692 is a 50th anniversary issue, thus the higher price point.

Reading over the list, I noticed Marvel’s ratings system is listed. It seems a bit pitched at a younger age range than DC’s:

Most of Marvel’s line seems to be rated T+, much as DC’s line is too heavily rated as only for ages 12 and up, though Marvel has more books either all-ages or for ages 9 and up. While still too disproportionately aimed at older readers/ignoring children, at least Marvel has a “MAX” line of books for the truly over-the-top stuff, and seem to somewhat rely less than DC on across-the-board shock-value violence as a crutch. Or at least as far as I can tell, mainly just reading the Spider-Man titles (versus the X-books, etc.).