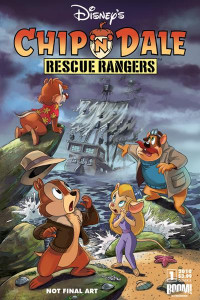 I’ve finally found what’s coming out from Boom! Studios for December 2010. Only two books are of interest this month (cover price of $4 each):

Meanwhile, Boom! debuts this month another comic based on the old “Disney Afternoon” lineup of shows, this one “Chip and Dale Rescue Rangers.” This was Disney’s second weekday afternoon series, produced in the late 80s after their success with “DuckTales.” While I liked “DuckTales” better, I did regularly watch “Rescue Rangers” as well, at least until the debut of shows like “Tiny Toon Adventures” the following year in an opposing timeslot. Unfortunately, there’s no indication what the opening issue’s story will be about, or if it’s part of an ongoing storyline like the recent Darkwing opener.

Both comics have alternate covers. In Darkwing’s case, the second cover (with Darkwing swinging) is a parody of the cover for “Batman” #1 from 1940 (the first appearance of the Joker and Catwoman).