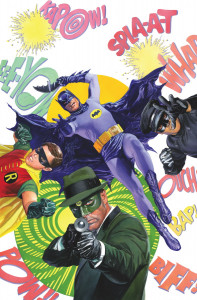 Here’s what’s of interest from DC Comics for June 2014. A full list of solicitations are available here.

This month sees the start of a miniseries just for the “Batman ’66” title—a crossover with the Green Hornet. Presumably the digital-first series is doing well for DC, if it’s meriting a miniseries.

“Tiny Titans” returns to DC in its own six-issue miniseries.

Despite being DC/Time-Warner’s current cash cow, Batman’s 75th anniversary this year feels more low-key than his pal Superman’s last year. However, two 75th anniversary volumes are being released in July: one for Batman, and another for the Joker. (Yes, the Joker didn’t debut until 1940, a year after Batman.) The Batman volume includes at least one “first meeting with Superman” story. Unfortunately, it’s not “Superman” #76 (the “Bruce and Clark meet on a cruise ship” story), but “World’s Finest Comics” #94 (Superman and “Powerman”).