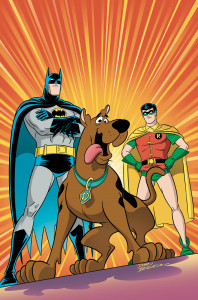 This month’s “Showcase” features a resolicited “Strange Adventures,” DC’s classic 50s/60s science fantasy title. Superman fans might like to get “Superman vs. Mongul,” reprinting some of Superman’s Bronze Age fights against the alien conqueror.

While apparently DC doesn’t think much of Scooby-Doo (but does think highly of 45-year-old fans), they do think enough of Scoob to give him a second title. Titled “Scooby-Doo Team-Up,” the solicitation states it’ll be a bimonthly miniseries, but doesn’t indicate for how long it’ll run. While previous publicity billed this as a Batman/Scooby team-up, the title leaves Bats’ name out of it, which makes me wonder if some other heroes might show up—the Blue Falcon and Dyno-Mutt? Or even actual super-powered DC heroes like Superman? As for which versions of Batman and Robin, the artwork and the Bat-villain (Man-Bat) suggests it’ll be based on the late Silver Age or Bronze Age incarnation of the Dynamic Duo. That’d certainly keep with the 1969 origin of the original “Scooby-Doo” series, as well as the early 70s “New Scooby-Doo Movies” appearances of the Caped Crusader.