Sales for 2014 total $935 million, up 7% from 2013. Comichron/ICv2 sales figures don’t include subscription services like Marvel Unlimited, library purchases, or mail subscriptions. An infographic Comichron made outlines and breaks down the various sales categories: 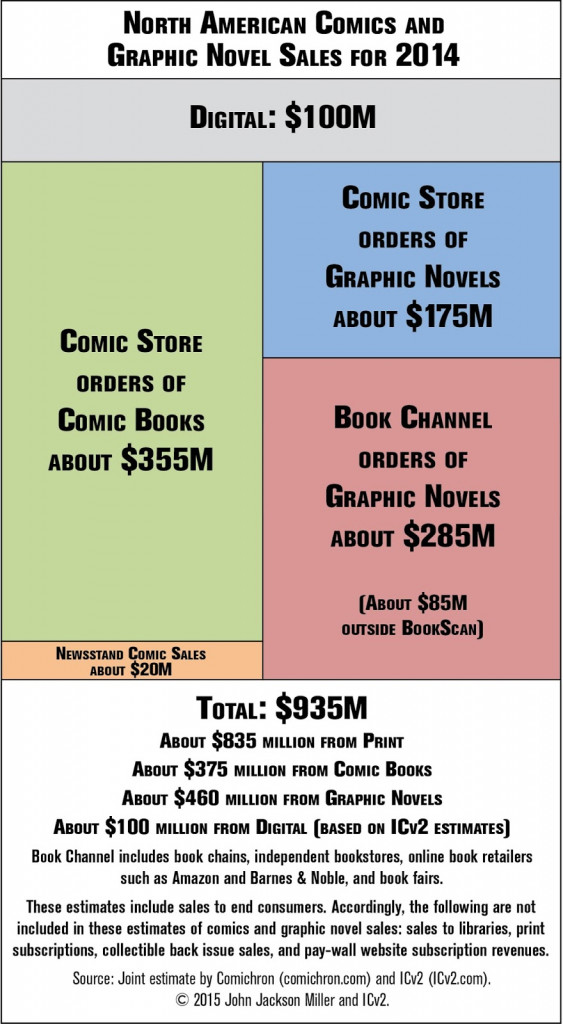 In percentages, the above sales break down to:

As for how sales in each category have changed from 2013:

It’s a good thing that comics sales are up, which is good for the long-term future of the medium.

As the infographic notes, “book channel graphic novel sales” would be sales of trade paperbacks/graphic novels at “regular” bookstores (Barnes and Noble, independent stores, etc.) or online sellers like Amazon. Digital sales would include dominant (and Amazon-owned) digital comics seller Comixology. Comichron notes that sales of digital haven’t come at the expense of paper sales, showing the positive effects of digital attracting new readers. So while comic shops are staying steady, the biggest boosts in sales are from newer fans buying comics from “normal” bookstores and digitally. And many of these newer fans are children (see many of the books on the New York Times graphic novel best-sellers list) or women, which adds diversity to the medium along with the sales boost.

As for the idea of promoting comics on newsstands, that’s pretty much a thing of the past, as shown by a 20% drop in sales from 2013; Marvel ceased selling comics on newsstands awhile ago. Newsstand comics also only make up 2% of all comics sales. Today’s new readers are much more likely to start reading comics via digital stores or in trade paperback/graphic novel form.