Home › Diverse Media Notes › Wedding bell blues for Batwoman: DC says “no” to wedding (and drives writers from the comic) 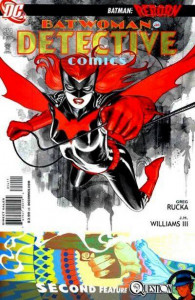 Earlier today, it was announced that the writers of the “Batwoman” comic, J.H. Williams III and Haden Blackman, have walked off the book. As The Mary Sue outlines, it seems to be the same micromanagement by DC’s editors/head honchos that’s driven off a disturbingly large number of other writers and artists in recent months. Among the micromanagement aspects this time, however, is that DC had forbid the writers from showing Kate “Batwoman” Kane marrying her beau, Maggie Sawyer.

While this decision probably stems from DC’s current bizarre (and adolescent) aversion to showing any of its rebooted New 52 characters as married (save, for some reason, Aquaman and Mera), it also comes off projecting an anti-gay marriage image, even if unintended. Thus, there’s a lot of headlines online today about “DC against lesbian superhero from marrying!,” which probably aren’t the headlines DC was hoping for. This is also on top of the already-present negative press about losing yet another pair of writers.

Of course, if DC had more thoughtful management, they’d recall that weddings tend to see a spike in sales in superhero books, just as they’re ratings spikes for long-running TV shows. Gay weddings in particular have been a boon for DC’s rivals Marvel (with Northstar) and Archie (with the adult Kevin Keller in “Life With Archie”), including garnering lots of positive goodwill from gay rights groups. They also received a lot of media attention; surely the wedding of a Batman-related openly gay character would garner such, especially given how over-reliant DC is on Batman.

For that matter, “Life With Archie”s whole premise is in the adult Archie being married to Veronica or Betty (in two alternate futures), and the title’s nearing its third year anniversary. So far, “Life With Archie”‘s readers haven’t found the idea of a married character as “unrelatable,” “old,” or “boring,” as marriage is sometimes accused of being for superhero titles. If it’s a superhero setting that matters, the premise of “Love and Capes” also mainly revolves around the Crusader and Abby’s relationship, and that didn’t hurt its popularity one bit.

With DC’s ongoing and clearly embarrassing problems with retaining creative talent, as well as their lack of attention to fixing what’s truly wrong with their business model (having Ultraman of the Crime Syndicate snort Green Kryptonite like some 80s yuppie snorting cocaine isn’t fixing things), I have to wonder how much longer all this will go on. Given the boom in indie comics, webcomics, etc., DC certainly isn’t the only game in town anymore, especially when one can use one’s own best ideas for their own comics. I suppose at this point, sales will have to decline to the point that there’s a shake-up in DC’s higher management (read: DiDio leaving). In the meanwhile, I’ll stick with DC’s trade paperback reprints of Bronze Age comics (just bought “Crisis on Multiple Earths, vol. 6”) and their usually well done digital comics (“Batman ’66,” “Adventures of Superman,” etc.).