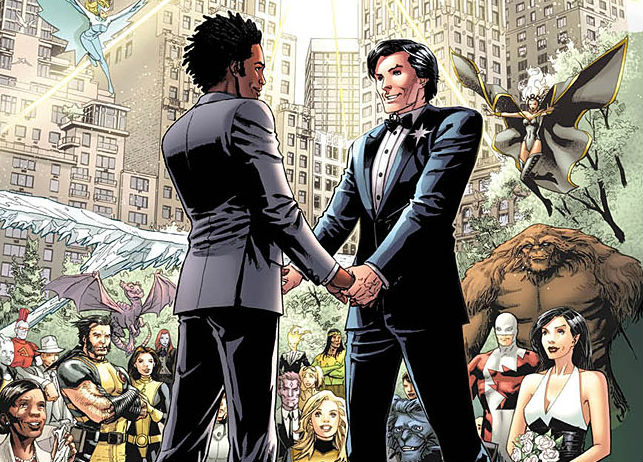 Below is Northstar’s backstory, trimmed down and simplified as much as possible. A mutant, Jean-Paul and his twin sister Jeanne-Marie were born in Montreal, but were orphaned at an early age.

Raised separately, Jean-Paul grew up. After some dubious life decisions (including joining a violent Quebec separatist group), Jean-Paul took up skiing. Thanks to his powers, Jean-Paul excelled at such, and became an Olympic athlete.

Eventually, Jean-Paul was invited to join the Canadian government-funded superhero team Alpha Flight. There, Jean-Paul reunited with his long-lost sister. She also had mutant powers, and now called herself “Aurora.” Jean-Paul dubbed his superhero identity “Northstar.” His first contact with the X-Men was as part of Alpha Flight’s attempt to “reclaim” Wolverine for the Canadian government (per the “Weapon X” program).

The early 90s saw various changes to Northstar. One such change was discovering he was “really” from a race of fairy-like elves. That’s fortunately since been retconned out. Another change was Northstar’s adoption of an infant who was HIV-positive; Jean-Paul’s daughter soon died from AIDS-related complications. Jean-Paul subsequently campaigned for HIV/AIDS prevention and wrote his memoir.

The biggest change, however, was Northstar deciding to come out publicly. This happened in 1992’s “Alpha Flight” #106. Jean-Paul’s coming out stirred some real-life controversy and media attention at the time. The Comics Code Authority had only relaxed its ban on depicting non-heterosexual characters a few years earlier.

Since coming out, Jean-Paul’s had various adventures. These have included extended stints with the X-Men and newer versions of Alpha Flight.

In recent years, Northstar gained a boyfriend named Kyle Jinadu. Kyle, like the adult Kevin Keller’s husband, is Black; he works as Jean-Paul’s public relations manager. Jean-Paul proposed to Kyle in May 2012, with the wedding taking place in June’s “Astonishing X-Men” #51.

Of course, superhero comics treat weddings as a big deal. However, Northstar’s wedding was made an even bigger deal than usual. Marvel promoted the wedding on ABC’s “The View.” Of course, Disney owns “The View,” Northstar, and Marvel.