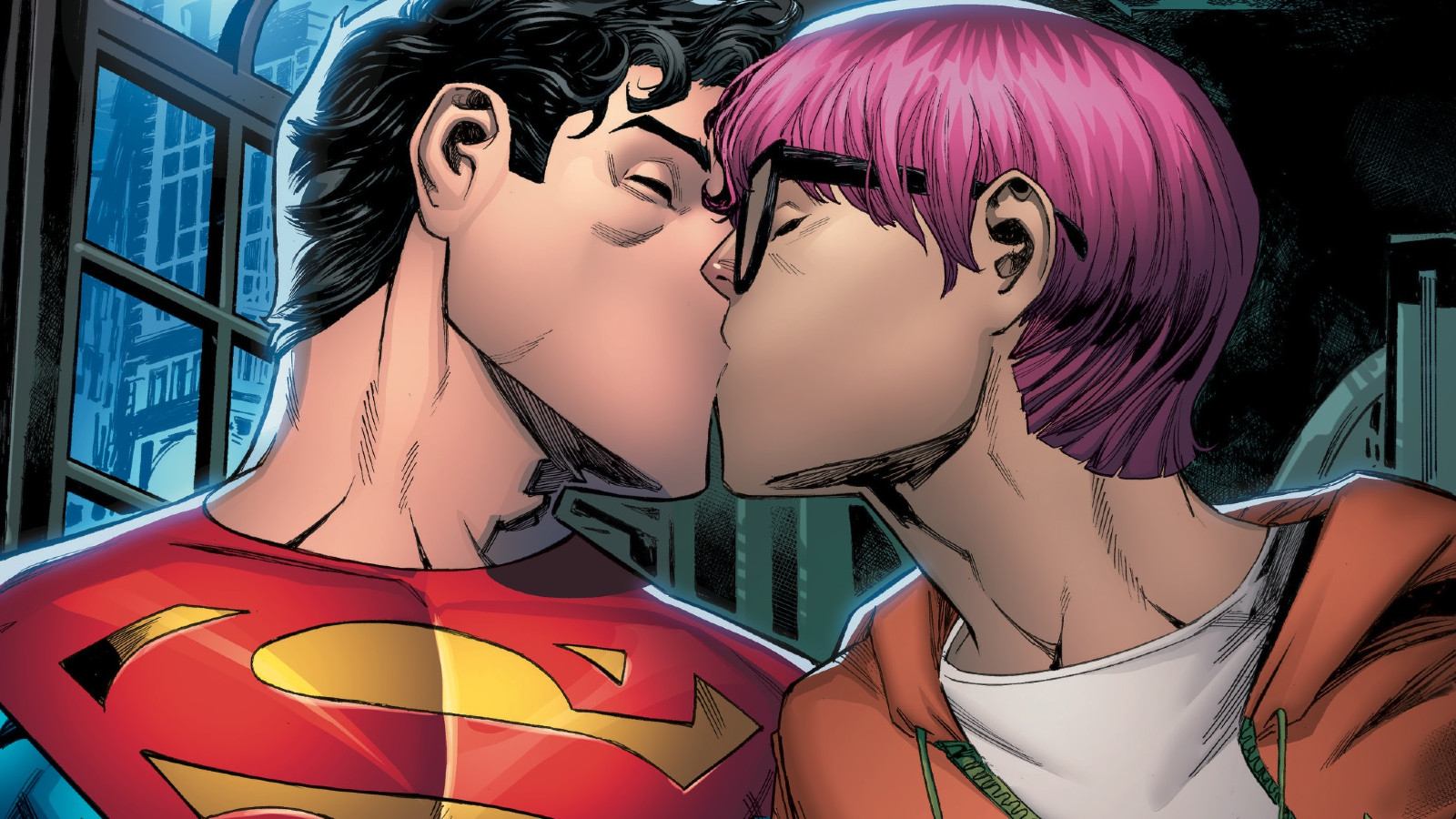 On Monday (timed for National Coming Out Day), comic-related news broke that quickly made mainstream news: Superman’s son, Jon Kent, is coming out as bisexual in “Superman: Son of Kal-El” #5, due to come out November 9. The series’ premise is that Jon’s father is off on a lengthy mission in space. The teenage Jon, operating as Superboy until then, took over his Dad’s duties on Earth as Superman.

The news has been the buzz of the internet, and raised some other questions (some valid, some ludicrous), which I thought I’d answer in this post.

This isn’t the “real” Superman? Also, Superman has a son?

As others have noted repeatedly, this isn’t “our” Superman, i.e. Clark Kent, who’s come out. This is Jonathan “Jon” Kent, the son of Superman and Lois Lane. (Clark and Lois got married back in 1996, if you forgot.) Jon was born in 2015 in the (convoluted) crossover comic storyline “Convergence: Superman” #2 (July 2015), and named after his adoptive grandfather, Jonathan “Pa” Kent.

Until recently, Jon was portrayed as a grade-schooler. However, most DC/Marvel superhero comics writers, like soap opera writers, don’t like writing about children, and prefer writing about teenagers instead. Probably because teens can date, drive, hold jobs, etc. like adults, and DC/Marvel haven’t primarily targeted children in decades. As such, Jon (in another convoluted storyline) was rapidly aged up in-story into being a teenager. Fan reception of this was (based on my Twitter feed) fairly negative. In DC’s defense, every previous version of Superboy has usually been portrayed as a teenager versus a grade-schooler. Speaking of which…

Wasn’t there another young version of Superman or Superboy?

The longest lasting, and original, Superboy was Clark Kent as a kid. Clark operated as a superhero in Smallville under the name “Superboy”; he was the world’s first major superpowered superhero. Superboy debuted in “More Fun Comics” #101 (January 1945) and stayed in print until the Superman reboot of 1986. Clark made his debut as Superboy at age 8, and the earliest stories showed him as a grade-schooler. However, he was soon aged up to being a teen, which became the “default” Superboy setting.

The 1986 Superman reboot ditched the idea of Clark having been Superboy; like in “Action Comics” #1, Clark first became a superhero as a full-grown adult. Several reboots/writing shifts since have gone back and forth on whether or not Clark operated as Superboy (mostly in the future with the Legion of Super-Heroes).

Outside of comics, Superboy/teenage Clark’s most prominent media appearances include: a series of 60s animated shorts by Filmation; a live-action “Superboy” TV show in syndication in the late 80s and early 90s; the 2000s “Legion of Super-Heroes” series (under the name “Superman”); and the 2000s live-action series “Smallville” (Clark had no heroic identity, but some of the traditional Superboy elements were used in this series anyway).

The second major version of Superboy, and main modern version until recently, is Kon-El, aka Conner Kent. A clone of Superman and Lex Luthor’s combined DNA (long story), Kon-El first appeared in “Adventures of Superman” #500 (June 1993) during the “Death of Superman” storyline.

Kon was at first written as a very “90s” teenager—cocky, egotistical, and often hitting on women, in contrast to Superman. Fortunately, Kon soon mellowed out from all this. Superman, after warming up to Superboy, even gave Kon his Kryptonian name. (Kon also later gained the name “Conner Kent,” after living with the Kents in Smallville as Clark’s “cousin.”)

Conner was written out for awhile in the 2010s (after the ill-fated 2011 “New 52” reboot), but eventually returned, though he doesn’t seem to be used much these days.

Outside of comics, Kon-El’s main media appearances have been in the “Young Justice” animated series and the HBO Max series “Titans.”

While fans are glad Jon’s come out, many hoped to see Kon do so. For years, many fans have wanted to see Kon paired up romantically with his best friend Tim Drake, who recently came out as bisexual.

The news of Jon coming out enraged some conservatives, including Arizona state Senator Wendy Rogers. Rogers sent the following tweet:

Besides her typo of “Louis Lane” undermining her tweet, she also wrote “Thooperman,” presumably a reference to the old stereotype of gay men having a lisp… a stereotype I haven’t seen anyone reference in ages. (She couldn’t think of a less ancient stereotype?) As for “Hollywood,” it points to the general public viewing superheroes as movie, TV, and video game characters first, and comic characters last (if at all). Superman’s general perception is still dominated by the Christopher Reeve movies by a country mile (followed by lingering Silver/Bronze Age elements and “whatever versions one grew up with”), no matter how many reboots DC tries.

As for “Louis,” there actually is a Louis Lane: Lois Lane’s cousin, who appeared only in one story, “Superman” (vol. 1) #349 (July 1980). The story sees Mr. Mxyzptlk magically create an alternate Earth with gender-swapped version of everyone: female versions of Batman (“Batwoman”), Flash, and Black Canary (“Black Condor”); “Superwoman” instead of Superman as Metropolis’ hero; and a male version of Lois Lane (“Louis”). Later, after Superman defeats Mxy and everything returns to normal, Clark’s surprised to learn there really is a Louis Lane, Lois’ visiting cousin.

Is a bisexual Superman really a big deal?

What makes this stand out is that it’s Superman (or a version of Superman) coming out. While heroes like Northstar or Batwoman made a splash, they’re still not household names. (Unless one’s a CW “Arrowverse” fan.) Superman, meanwhile, is the world’s most famous superhero, one everyone breathing knows. Your average politician or someone older likely doesn’t know who Harley Quinn, Iceman, or America Chavez are, but they definitely have fond memories of the Man of Steel.

As such, it’s a big deal, possibly even bigger than the recent coming out of Tim Drake. If even the Man of Tomorrow can be someone who’s non-heterosexual (Jon) or a supportive and loving parent of an LGBTQ kid (Clark), that says a lot. Obviously, Lois is also supportive of her son. Ironically, Jon’s new boyfriend is a journalist who’s a big fan of Lois’ work.

Jon isn’t the first Superman-related character who’s come out. A few other LGBTQ characters in the Superman mythos include: