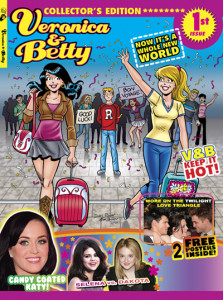 Archie’s “turning it up to 11” in 2011! (Yeah, I know, but I need something to replace the soon-to-end 2010 “year we make contact” puns/bide time until I can make “end of the world in 2012” jokes) Or in this case, Archie Comics is coming out with a second magazine next year to go along with its successful “Life With Archie” magazine, a new title called “Veronica and Betty.”

I can see the advantage of expanding to a second magazine. While the Archie digests are pretty widespread in supermarkets and newsstands, magazines would allow Archie an even bigger presence in stores. I’ve seen “Life With Archie” carried at my neighborhood Walgreens (which normally doesn’t carry any comics), as well as the supermarket. It’d also allow Archie to publish a magazine set in the “mainstream” Archie universe, and thus more closely tie into the rest of their books, versus “Life”‘s future settings.

One observation about the magazine’s title: “Veronica and Betty?” I wonder why they decided to give Veronica top-billing, given for decades it’s always been “Betty and Veronica” (akin to how you wouldn’t find “The Brain and Pinky,” or “Barney Rubble and Fred Flintstone”). Johanna at Comics Worth Reading suggests it’s to differentiate the magazine from the various comics/digests named “Betty and Veronica.” Perhaps so, though still seems a bit unusual to see the two’s names reversed. On the other hand, it did make for this amusing gag-cover.