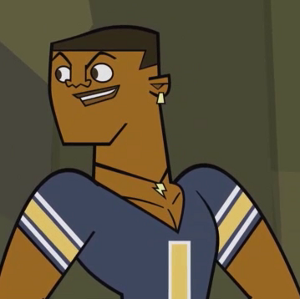 This week’s “minorities in cartoons” entry is Lightning, a contestant on the fourth season of the Teletoon/Cartoon Network series “Total Drama Island,” dubbed “Total Drama: Revenge of the Island.” (Yes, there’s spoilers by the metric ton ahead; you’ve been warned.)

Lightning is depicted largely as a stereotypical jock. He’s into various sports, but most particularly football. (Despite the show’s setting and his overachieving jock nature, he doesn’t seem to be into hockey.) Lightning’s signature trait is (always) referring to himself in the third person. He also has a tendency to attach “sh-” as a prefix to words (“sh-BAM!”).

Lightning managed to annoy most of his teammates as the season wore on. None moreso than teammate Jo, who Lightning (as she pointed out in her elimination) was too stupid to realize Jo was a girl. Toward the end of the season, Lightning developed a large animosity toward Cameron, one of the season’s three Black male contestants. Cameron, in contrast to Lightning, is a sheltered, respectful, brainy geek. (The third Black male contestant, named “B,” was also quite smart, but never spoke a word, and got eliminated early.)

Lightning’s grudge against Cameron reached its peak when both became the final two contestants in a “brain versus brawn” season finale. There, Lightning ended up struck by, well, actual lightning, which turned his hair white—prompting him to nickname himself “White Lightning.” Wonder what a certain superhero would make of that name…

Here’s where it gets even more bizarre: the producers of the show make at least two alternate endings for each season’s finale. The various countries airing the show can air whichever ending they wish, to determine their own winner for the series. Here in the US, Lightning was deemed the winner of the $1 million grand prize. However, in most other countries’ broadcasts of the series, including native country Canada, Cameron is deemed the winner. Given Cameron was more likable toward the end than Lightning, I can’t blame them. Either way, Schrödinger would’ve been proud.

Lightning is voiced by Tyrone Savage.

An “extra” produced by the show is the characters’ “audition reels” for the reality show. Here’s the one for Lightning, apparently culled from dialogue from the series rather than an original reel like the others. Thus why Lightning behaves as if he’s already on the show (well, aside from his massive ego).