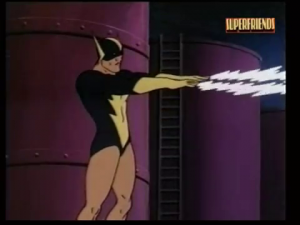 This week’s minorities in cartoons entry is Black Vulcan, an African-American superhero who appeared in the classic 70s/80s series “The Super Friends.”

Vulcan was created along with several other minority superheroes to add diversity to the otherwise-all-Caucasian core group of Super Friends. None of these characters made it into the comics. However, the comics introduced similarly diverse heroes, as part of the globe-spanning superhero team the “Global Guardians.”

Post-“Super Friends,” Black Vulcan’s turned up several times on the Adult Swim series “Harvey Birdman: Attorney at Law.” There, he’s parodied like the other old-time Hanna-Barbera characters. One episode made fun of his name; Vulcan claims the name (and its attention called to his race) wasn’t his idea, but Aquaman’s.

Other than such parodies, however, Black Vulcan’s generally gone unused since the “Super Friends” left the air. Most spin-off media favor using Static and (lately) Black Lightning, when an African-American hero-with-electrical-powers is desired.