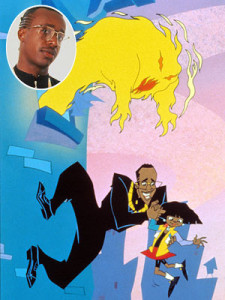 This week’s minorities in cartoons entry is the short-lived TV series “Hammerman.” The show was produced by DIC. It aired on ABC during the 1991-1992 season.

“Hammerman” was designed to cash in on the then-popularity of hip-hop star M.C. Hammer, similar to the Beatles and Jackson Five cartoons of the 60s/70s respectively.

The show’s premise was about a youth center worker named Stanley Burrell (MC Hammer’s real name). Stanley inherited a pair of magical, talking shoes that, when worn, turned him into the singing, dancing superhero “Hammerman.” Stanley had inherited the shoes from “Gramps,” an elderly man who was the now-retired superhero “Soulman.”

Hammerman’s adventures saw him fight various threats to his hometown. One such threat was the short-in-height French-accented rapping villain “Rapoleon.”

The series had a “Fat Albert“-like pro-social theme, with the end of each episode featuring a live-action MC Hammer discussing the story’s lesson.

One episode I recall seeing (no episode title, sorry; info on the show’s hard to come by online) had Hammerman time-travel into the future…which happened to be the 2010s. Since the episode was about a kid wanting to drop out of high school, his future self was ill-equipped to find work in his “Jetsons”-like future. Another episode saw Gramps briefly come out of retirement. Gramps/Soulman’s character and image was based on that of the late R&B legend James Brown.

The show ended up being poorly received. Criticisms included: the show’s moralistic tone; M.C. Hammer’s popularity already waning by the time this show debuted; and the extremely poor animation. It also didn’t help that it had stiff competition:

By the spring, “Hammerman” was moved to the end of the Saturday morning schedule. I imagine it probably got frequently pre-empted by ABC or local stations’ sports broadcasts. There’d also be competition in some areas (or at least mine) with “Soul Train.”

After this season, “Hammerman” was axed, and that was that.

“Hammerman” received a few VHS releases. However, there’s been no DVD releases as of this writing. Even the equally short-lived “Wish Kid” got that.

Does Star Wars or Marvel earn more for Disney at the box office?