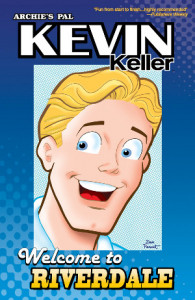 Yet another bit of cancellation news about a comic I’ve enjoyed: “Kevin Keller,” the comic about Archie’s openly gay character, will be cancelled in July with issue #15. Kevin’s creator and main writer/artist, Dan Parent, gave some remarks on Kevin’s history and Archie’s future plans for the character in an interview.

I’m sorry to see Kevin’s title being axed, but I presume sales must’ve declined. Archie’s sales on their “floppy” comics have usually been much lower than those for their digests, which usually rival what a top-selling DC or Marvel book sells. With “Life With Archie” also ending soon, that’ll end (for now) any regularly published stories featuring Kevin. I assume Kevin’s short-term future might be similar to that of Cheryl Blossom’s, with Kevin making supporting character appearances, etc. in various Archie stories, as well as digest reprints of his solo book.

As for comics starring LGBT characters, while greatly differing in tone from “Kevin Keller,” I still have a few comic strips I read, including “A Couple of Guys” and “Kyle’s Bed and Breakfast.”