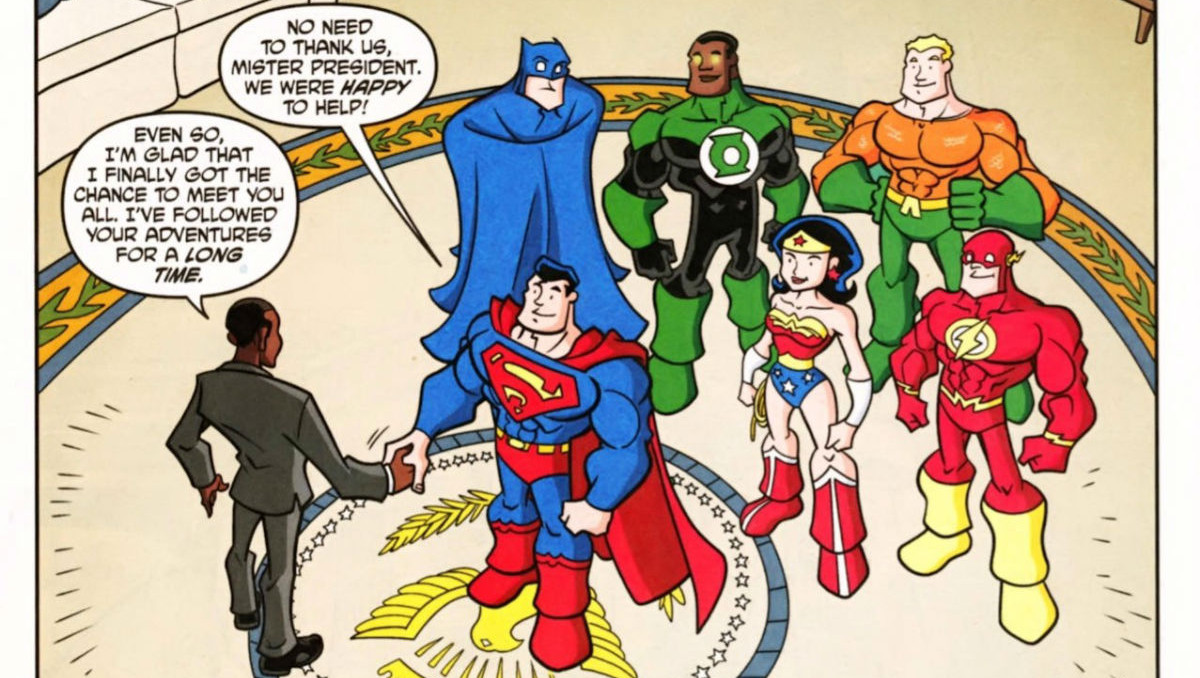 While he’s a hero (and citizen) of the world, Superman’s often seen as a positive symbol of the United States of America’s better aspects. Between that and the nature of his adventures, it’s inevitable that the Man of Steel should meet the president of the United States. DC’s varied over the years between depicting fictional presidents (such as Lex Luthor in the early 2000s), indirectly showing the president (only seen from the back, or hidden in shadows), and showing the actual figures in office.

So, in yet another trivia list post, I thought I’d take a look at modern United States presidents Superman’s met over the years. I note “modern” as starting with Superman’s 1938 debut, so I won’t list time-travel meetings of historical presidents (like George Washington). I’ll also stick with real-world presidents, versus the aforementioned fictional presidents DC’s shown.

Various flashback stories to World War II have shown the Golden Age/Earth-2 Superman meeting FDR. The most prominent of these meetings would be the origin of the Justice Society in “DC Special” #29 (August/September 1977).

In “Superman” #48 (September 1947), Luthor blocks the Earth’s sunlight in his latest world domination attempt. Superman soon meets in person with the (shadow-covered) president about the situation. While the president isn’t named, it’s obviously meant to be Truman.

The only actual reference to Ike as president I could find is as a flashback. In “New Adventures of Superboy” #12 (December 1980), an eight-year-old Superboy (three months after his debut) is giving his origin story to then-“Planet”-reporter Perry White. Perry asks if Superboy’s registered with the US government as a “resident alien.” The Boy of Steel responds that he’d met in person with President Eisenhower, who assured Superboy he wouldn’t face any problems. (Congress later grants him an honorary American citizenship.)

JFK famously made numerous appearances in the Superman books in the early 60s. Thanks to Superman’s sliding timeline, Kennedy also made several appearances in Superboy comics during the early 80s. For more, see my previous post about JFK in cartoons.

Superman met LBJ at several points in the 60s, both while Johnson was vice president (see the above Kennedy stories) and as president. One example is a storyline in “Action Comics” #355-357 (October-December 1967) where Superman deals with a criminal powered by Kryptonian explosives. Johnson appears in “Action” #356, conversing with Superman on how to stop a villain who’s taken over Washington, DC.

Superman meets Richard Nixon in “Action Comics” #390 (July 1970), concerning a super-weapon that can destroy Superman himself. Nixon’s not named (beyond “Mr. President”), but his silhouette (which is often caricatured) is a dead giveaway on his identity.

Not quite a full-fledged meeting, but Superman sees (via Green Lantern’s power ring) an image of President Ford delivering an address in “Superman Family” #172 (August/September 1975). Given the short tenure of Ford’s presidency, I’m not surprised there aren’t more examples to choose from.

The story involves Ford giving an executive pardon to Lex Luthor when the criminal genius’ smarts are needed to save the Earth (and the entire JLA is unavailable)—likely a shot at Ford’s then-recent pardoning of Nixon.

“Action Comics” #514 (December 1980) sees Superman briefly meet with who’s presumably Jimmy Carter; however, he’s only referred to as “Mr. President.” This issue would’ve been on newsstands a month or so before the 1980 presidential election. An earlier issue of “Superman Family” featured a more direct caricature of Carter (down to a Southern accent) meeting the story’s antagonist.

Reagan met with Superman during the “Legends” crossover storyline, the first such major story after “Crisis on Infinite Earths” rebooted DC’s line of books.

A 1992 storyline in “The Demon” saw Etrigan mounting a presidential campaign, which somehow gets Superman briefly involved. Bush is referenced on a TV or computer screen, according to the DC Comics Database wiki, but otherwise doesn’t meet the Man of Steel. This is the closest I could find to an actual meeting or reference between Superman and Bush Senior.

Both Bill and Hillary Clinton spoke at Superman’s funeral during the “Death of Superman” storyline.

In the “World’s Finest” TV movie on “The New Batman/Superman Adventures,” Superman saves Air Force One from a terrorist attack. Afterward, we see Superman speak with the president, though we only see the back of the president’s head. However, the hairstyle clearly shows it’s Bill Clinton. Clinton frequently appeared in Kids WB cartoons of the era; he’s even in the opening credits of “Animaniacs!”

Thanks to the use of various fictional presidents (particularly the “President Lex Luthor” storyline and its aftermath), Bush never appeared in the actual comics published during his two terms in office.

However, the New 52 reboot in 2011 featured a flashback to the Justice League’s origin five years earlier (in 2006); there, Bush publicly thanked the gathered new superhero team.

DC seemed slow to get on board with the “feature Obama” trend comics had during his first term; they also skipped the “put him on a comic cover” craze. I assume it’s in part from DC’s use of fictional presidents in the 2000s. However, DC eventually decided to show Obama was the DCU’s US president.

“DC Super Friends” #17 (September 2009) features the Super Friends, including Superman, meeting President Obama (though unnamed) at the White House, as seen in this post’s featured image. Obama tells Green Lantern (John Stewart) in particular he likes his haircut. J. Bone, the cover artist, also drew a drawing of the heroes hanging out with Obama.

In real life, Obama’s a comic book fan; he’s even made a few references and jokes about the Man of Steel.