Google today unveiled a revised version of Google Play Music. Besides dropping the awkward “All Access” name (which was about time), Google Play Music now offers users of its free service streaming audio of various “stations,” just like its $10/month service. Unlike paying customers, the streaming service comes with only six song skips per station per hour (similar to Pandora), and doesn’t allow for saving songs for offline listening. It does let you make a “station” based on entering a particular artist’s name. Like Spotify, ads will also play on the free streaming service. Google plans to update its Android and iOS apps soon, but the web version (and thus the Chrome OS version) is live now. The new version of Music’s also only available here stateside, with no word on when non-US customers will gain access.

A screenshot of the new Google Play Music: 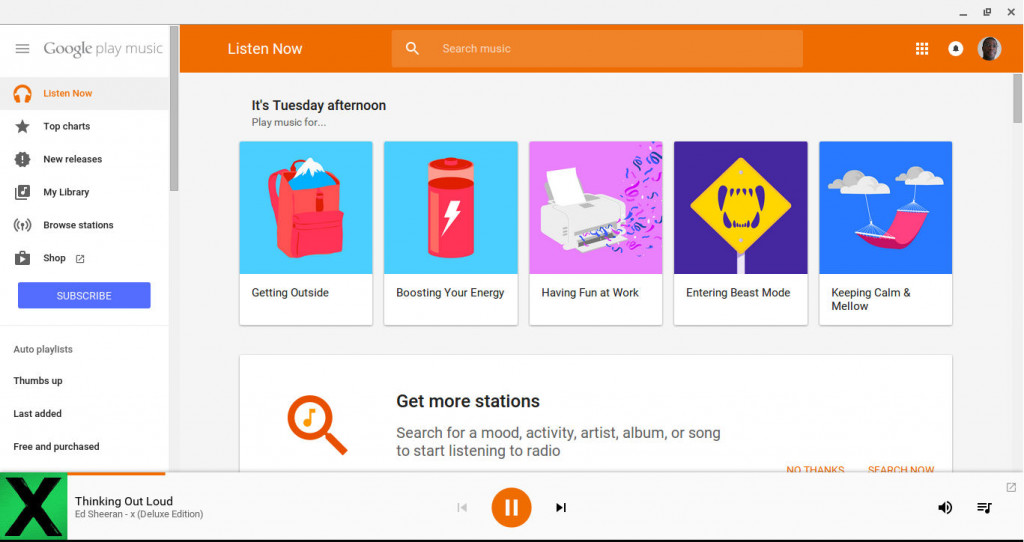 I’ve briefly tried out Google Play Music’s new streaming service. If you’re a paying customer or recently tried Google’s trial service, it’ll be quite familiar: there’s various “stations” available for just about every music taste, from “’00 R&B Dance Party” to “Today’s Inspirational Country Radio.” While the limited number of skips might be annoying, it does take advantage of Google Play Music’s 30 million song library to choose from, ensuring a wide range of listening choices. A larger library’s a big reason why I switched from Pandora to Spotify for streaming audio.

Google’s changes are meant to make Google Play Music more competitive with Spotify and Apple Music. The new features (curated playlists, etc.) makes uses of Google’s recent purchase of Songza. While Apple doesn’t offer a free tier, its sheer size/influence on the music industry might make that less of a factor. There’s also that Apple’s producing an Android version of its music app, which will directly compete with Google’s own installed-by-default music service.

That said, Spotify has a pretty entrenched user base, and unlike Google, isn’t a “jack of all trades” company (videos, email, cloud-based laptops, etc.). There’s also a few (such as Bloomberg) wondering if Google’s just competing with itself, since YouTube’s already free. I also wonder if Google’s new service will hurt Pandora more than it will Spotify, given the services’ similarities/Google’s bigger song library.

For now, I’ll probably continue to try out Google’s streaming audio service, along with my current use of Spotify, etc.