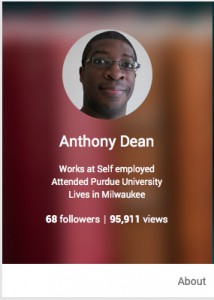 Google’s just released a new feature for its social network site (and mandatory YouTube comment system), Google+. Profile pages will now include the number of times said content has been viewed by others, dating back to October 2012. I’ll assume it’s not an April Fool’s joke, given the timing; Google’s April Fool’s joke this year seems to be something about Google Maps and Pokemon.

As you can see by this post’s picture, I currently have 68 followers on my Google+ profile page, with a total of 95,000+ views to date. Despite the double-digit number of followers, I assume the views come from my participation in Google+’s Communities forums, as well as views from Google searches in general (for material I posted as “public”).

If you’re wondering, yes, the feature can be turned off. In your Google+ profile, go to Settings > Profile, then uncheck “Show how many times your profile and content have been viewed.”