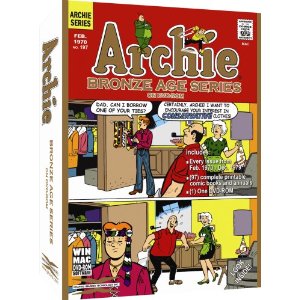 The DVD-ROMs, produced by GIT Corp, each contain the entire run of stories for each title released between January 1970 through December 1979, including any annuals. The comics are reproduced as-is, including the original third-party and house ads. (An annoying “Archie” watermark is used on each page, which appears only if you use a non-Adobe Reader program to read the comics.) A followup series was planned, which would’ve featured the 60s comics, but the DVD-ROM line was canceled before that could happen.

It’s interesting to see some of the changes to the characters over the 70s. Betty seems to have changed the most, thanks to the increasing awareness of women’s rights over the 70s (though she still comes off as a bit ditzy at times compared to her modern self). Archie seems more willing to (along with Veronica) make fun of Betty’s quirks in a few stories. There’s also the changes in technology and pop culture, of course… all of the 70s fads are in full display here (as well as some remnants of the 60s in the early 70s stories, such as Archie and Betty annoyed about the then-new movie ratings system in one story). By the late 70s, the covers also change the logo to “Archie Comics Group,” apparently an attempt to imitate Marvel’s logo/name at the time? And of course, Archie has his long-obsolete-even-then Model-T jalopy.

Chuck Clayton also makes his first appearances in these stories, though I don’t think his first appearance was in any of the collected titles (guessing it was in “Pep”?). Nancy also puts in some of her early appearances by the late 70s issues, including a story where Archie and Chuck briefly get into a fight with each other!

The comics are in PDF format, so any reader will be able to open the files (though again, a watermark appears in non-Adobe Reader PDF readers), as well as the comics being readable (and printable!) on any operating system (including Linux). The DVDs were quite cheap on Amazon.com when I bought mine (for several dollars apiece), though availability might be limited as this series has been discontinued. As for why this series was discontinued (along with the other GIT Corp series for Marvel, etc.), I assume concerns about piracy (since there’s no annoying DRM) and the rise of digital comics stories (which aren’t as good a buy as these DVD-ROMs) are the reason.

If you’re interested in reading older Archie comics in a legal digital format, these DVD-ROM collections are a very good deal.