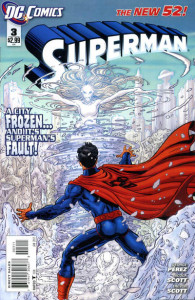 Issue #3 sees the “Superman vs mysterious superpowered aliens attacking for no clear reason” storyline continue, with Superman facing a mysterious freezing phenomenon in the middle of Metropolis. Meanwhile, his coworkers (Lois, Perry, and Jimmy) are worried that Clark seems distant/”off” lately.

This one I thought was OK, though didn’t feel as good as the previous issue. We see the “Superman can’t save everyone” theme show up again here, plus more of Superman’s past briefly delved into, as Clark is seen visiting Ma and Pa Kent’s graves in Smallville. There’s no indication yet of what it is the Kents died of. In the Golden Age comics, the Kents merely died of natural causes; in the Silver Age, the Kents died of a rare tropical disease contracted during a vacation to the Caribbean. In either case, Superboy (or young Clark Kent) couldn’t prevent their deaths.

The opening pages also play up the “do superheroes attract superpowered threats, or vice-versa?” question, as a sensationalizing reporter proposes a story about “Superman, Messiah or Menace?” while summarizing (to date) the events in Superman’s career. For some reason, Metropolis in this reboot has zepplins (“airships”) flying about carrying tourists, something it’s never really had before (save maybe the very earliest comics of the late 30s). It seems more like something Gotham City would have to me, though maybe it’s my memories of the opening credits of “Batman: The Animated Series.”

I’m hoping that we get to see Superman/Clark in an actual cheerful mood at some point. The reboot so far seems to be emphasizing Superman’s moodier side, which while Clark can be such, it isn’t his dominant personality trait. Then again, the “DCNU” reboot as a whole seems to be trying to make everyone seem “badass” (apologies for such a crude term), as if DC’s comics weren’t humorless enough already.

Since it’s a Perez story, it’s written with plenty of dialogue and panels, versus the splash pages and sparse dialogue of many other comics that makes paying $3 an issue feel like an even bigger ripoff. The art by Scott is nice as well, though I still prefer Superman with red briefs/his usual costume (versus this version that’s just meant to tie into the upcoming movie).

The comic comes with a backup story about the Ray, who’s also apparently getting the DCNU treatment. Not a big fan of the Ray (and what I read of the preview still doesn’t make me interested), but sure his fans will be interested in this revamp. This version features a new person as the Ray, a Korean-American named Lucien Gates.