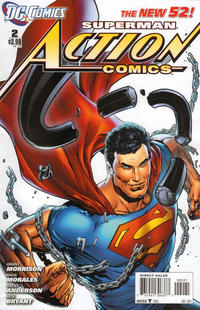 While I still hate Superman’s “Lil’ Abner” “uniform,” I did enjoy the story otherwise. (Starting with that it manages to be a reasonably stand-alone story, not just a cliffhanger written “for the trade”.) Here, Superman’s been captured by the US military, with Lex Luthor hired by the military to experiment on Superman… or at least, attempt to, as he’s more powerful than even Lex expected. Meanwhile, Lois Lane (getting wind of what’s going on) tries to enter the installation where Supes is being held, encountering her father, General Sam Lane, plus another person familiar to long-time Superman fans. By the end of the story, Superman (of course) manages to escape custody, while Lex is seen on the phone conversing with what looks like another familiar (to long-time fans) character.

The story was fairly enjoyable. As usual for a Morrison story, there’s plenty of his usual trademark of future plot ideas dropped throughout, such as the scene where Superman finds the military’s also holding the rocket that brought him to Earth. Unlike in previous versions, the rocket seems to be transmitting to Clark some sort of signals (in Kryptonese) that he can understand. Maybe Morrison’s trying to adapt the idea of Power Girl’s Symbioship for Superman?

Also interesting is that Superman’s cape is made of invulnerable Kryptonian cloth here, a Silver Age element that breaks from this title’s Golden Age-redux theme otherwise. In the Golden Age comics, Superman wore a uniform made of ordinary Earth materials, presumably made himself after the deaths of the Kents. In the Silver Age continuity, however, Ma Kent made Clark’s uniform (using a needle made from a piece of his rocket/Clark’s help cutting the threads, as anything from Krypton became invulnerable under a yellow sun) shortly before he became Superboy. I assume we’ll learn more about the backstory of Clark’s cape/rocket as Morrison’s run goes on.

One more thing of note here: an appearance at the military project by a “Dr. John Henry Irons,” who no doubt will (hopefully soon!) become the hero Steel.

The comic’s extras in the back include artwork for what Jor-El and Lara look like in this continuity (an updated Silver Age look). Morales makes a remark that Clark here looks “more like a 22-year-old nerd…,” which might indicate Clark just finished college, assuming a typical four-year courseload. Thus, Superman’s presumably 27 in the present (per their new, youthened “five year” timeline, and assuming he went straight to college from high school).