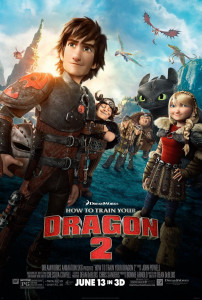 “How to Train Your Dragon 2” came in third place at the box office this weekend, earning $25.3 million. So far, the film’s made $95.2 million domestically and $76.3 million overseas, for a global total of $171.4 million. The film dropped from second to third place thanks to “22 Jump Street” dropping to second place. First place this weekend went to the debut of “Think Like a Man Too,” which made $30 million, earning back its $24 million budget and then some.

Meanwhile, “Maleficent” came in fifth place, earning $13 million for a domestic total of $186 million and an international total of $335.6 million, for a global take of $521.6 million.

In eighth place is “X-Men: Days of Future Past,” earning another $6.2 million. Its current totals stand at $216.8 million domestically and $475.3 million internationally, for a global total of $692.1 million. So far, “Past” is the third top-grossing film of the year, after “The Lego Movie” and “Captain America: The Winter Soldier.”

Finally, “Godzilla” came in tenth place, earning $1.8 million. Its domestic total stands at $195 million, while it’s earned $248.3 million overseas, for a global total of $443.2 million. It should drop out of the top ten after this weekend.

Next weekend sees opening the latest Transformers movie, “Age of Extinction,” which despite the heavy amounts of complaints about this film series to date, will probably rake in tons of cash anyway, especially overseas. Overseas box office gave the previous Pink Floyd-ish titled film “Dark of the Moon” a $1.1 billion global box office (it made a “mere” $352 million domestically). So fire away, but apparently people want to see shape-shifting giant robots based on a toy line/half-hour infomercial from the 80s. I haven’t seen any of the films yet myself, but they’re on the by-now-long-list of films I should get around to watching at some point…