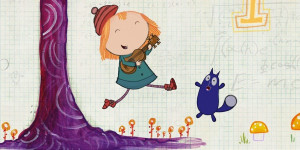 The 2014 Daytime Emmy Awards were given out yesterday evening. Unlike previous award shows, this year’s couldn’t find a television network to carry it, so it was only streamed online. This begs the question: what’s the point of the Daytime Emmys, if the very medium it’s giving awards to won’t televise it? I suppose one could argue that the shift to online productions (for Netflix, etc.) might negate this, plus the decline in the number and prominence of soap operas, but it still seems like a snub by the very medium the Emmys are supposed to be honoring.

Anyway, here’s a look at animated fare that won this year’s Daytime Emmys; a full list of winners is available here.

While I would’ve liked to have seen “Turbo FAST” win for its nominated categories, it’s still a win for DreamWorks, as “Kung Fu Panda” won for those categories.

Meanwhile, “Peg + Cat” seems to be a confirmed success for PBS, winning several awards. Ditto Nickelodeon’s “Peter Rabbit,” a new series based on the classic books of the same name.

Apparently I wasn’t the only one who liked the opening title sequence for “Sabrina: Secrets of a Teenage Witch.” I haven’t watched the show much since the first few episodes, however.

Less successful than Nick or PBS (or even The Hub) are Cartoon Network (two awards, both for the now-moved-networks “Star Wars: The Clone Wars”) and Disney Channel (one award for “Sofia the First”). Ironic that Disney, a company built on animation, was nearly shut out.