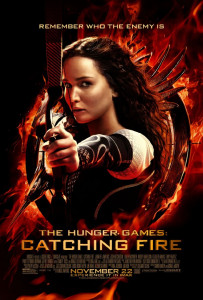 This weekend, as expected, saw “The Hunger Games” sequel “The Hunger Games: Catching Fire” end up capturing the box office as a massive hit. The film earned an estimated $161 million (according to Box Office Mojo) this weekend, earning back its $130 million production cost and then some. This is on top of the $147 million it’s made so far overseas. One would think this film (and “Gravity,” which is still in the top 10 at #8 with $3.3 million this weekend) would disprove the idea that women can’t be action/adventure film leads, but Hollywood can be quite sexist and stubborn.

“Thor: The Dark World” slid to second place, earning $14 million for a total take of $168 million, breaking even with its production budget domestically. Globally, it’s raked in plenty of cash, however (it’s made $381 million overseas).

Last week’s so-called “race-themed” film “The Best Man Holiday” slid off in box office, but still made $12.5 million for a total of $50 million in its second weekend. Yes, two of the top five films this weekend not only starred women/minorities, but also raked in Uncle Scrooge-size piles of cash for their producers.

“Free Birds,” the only animated film in the top 10, hung on to fifth place, earning $5.3 million for a total earned so far of about $49 million, still $6 million short of its budget. With “Frozen” probably putting the turkeys in deep freeze next weekend, its main hope to completely break even now is either DVD sales or whatever it makes overseas. Still, I’m glad the film with an openly gay voice actor (George Takei) has done much better than the film based on a book by homophobic writer Orson Scott Card (“Ender’s Game” finally fell out of the top 10, but is still a flop).