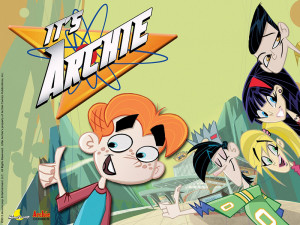 If this sounds familiar to 80s cartoon viewers, it should. My first reaction was thinking “The New Archies: 2013 Edition.” I’ve written about “The New Archies” a few weeks ago, so won’t rehash its premise here, but I’d have to wonder why Archie (or the show’s animators) want to revisit Archie-in-junior-high again. Archie in junior high is only set only 4-5 years before the (perpetual) present day, and is largely shown in the comics’ few flashbacks to that time/”The New Archies” as just “Archie before he got his driver’s license,” not the more distinctive grade school set Little Archie adventures. Perhaps the producers and Archie noted what a success the junior high-set “Sabrina, the Animated Series” was, though even that series eventually re-aged Sabrina back to her high-school self in the short-lived spinoff “Sabrina’s Secret Life.”

On a more positive note, the series isn’t being done in CGI; it’s promoted specifically as 2D. Whether or not it’ll be Flash-based is unknown, though I’m hoping it won’t be, of course. The promotional artwork only shows the immediate Big Five gang members (Archie, Jughead, Reggie, Betty, and Veronica), with no word on who else from the comics will appear. Since it’s set at Riverdale Junior High, presumably Mr. Weatherbee and Miss Grundy will be there. The two educators were present at Riverdale Elementary in the comics, as well as at the junior high in “The New Archies.”

I also assume they’ll forego “New Archies” stand-ins Eugene and Amani, and just use Dilton, Chuck and Nancy. Other than “The New Archies,” Chuck’s appeared in every other Archie animated production, dating back to the Filmation cartoons; thus I assume Chuck will be used, especially with his cartoon obsession. Chuck’s also been retconned (for what use that term has per Archie’s minimal continuity) into the Little Archie era in recent Archie stories, so there’s precedent for that. Not sure if we’ll get to see a junior high version of Kevin Keller, however, or if (like on “The New Archies”) Little Archie-era characters like bully Fangs Fogarty will return.

Also unlike the “New Archies” is the promotional release noting we’ll get to see “loopy capers involving mad scientists, aliens in the janitor’s closet, pirates, lake monsters and more.” Sounds like elements more faithful to the fantasy-filled Little Archie stories. Maybe the mad scientist in question will be Mad Doctor Doom? Or a renamed version of him, given trademark issues with a certain Marvel-ous Doom…