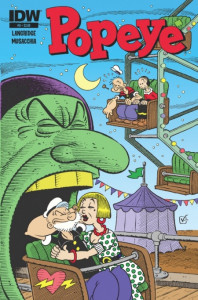 A reboot of classic comic strip “Joe Palooka” is coming from IDW, only now he’s a mixed martial arts fighter instead of a boxer. Has boxing’s prestige—such as it is—fallen off that much that it’s now considered inferior to something like MMA?

While I’m not a big viewer of the show, “Adventure Time” fans should be thrilled by this month’s various offerings from Boom!, including some variant covers and the final issue of a miniseries about one of the characters. There’s also an “Adventure Time” cover of “Bleeding Cool Magazine,” a magazine spun off from the website Bleeding Cool.

Fans of “My Little Pony,” or “bronies,” will also get a variant cover this month. It looks like the MLP book is also only a four-issue miniseries, though I suppose if popular enough, it could get a full-fledged ongoing monthly…