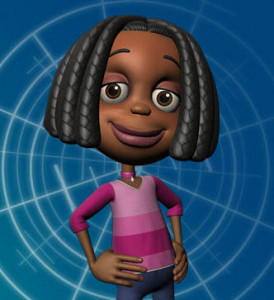 This week’s “minorities in cartoons” entry is Libby Folfax, one of the main characters on the 2000s CGI-animated Nickelodeon series “Jimmy Neutron.”

The series focused on the adventures of a super-intelligent genius 11-year-old named Jimmy and his less-intelligent best friends, Carl (a heavy-set, often worried kid who’s obsessed with llamas and has a crush on Jimmy’s mother) and Sheen (an excitable Latino kid who’s obsessed with a superhero named “Ultra Lord”). Sheen gained his own short-lived spin-off, “Planet Sheen.”

In the series, Libby’s portrayed as the best friend of Cindy, Jimmy’s rival and classmate (and later love interest). Unlike Carl and Sheen, Libby’s quite intelligent, though not to the degree of Jimmy.

As Cindy’s best friend, Libby usually joins in with Cindy in taunting Jimmy and/or criticizing the boys’ latest antics. Despite that, Libby usually also ends up involved in the episode’s events. Libby’s main interest is in music, particularly soul and pop.

Libby’s also the focus of some episodes. In one episode (“The Tomorrow Boys”), thanks to one of Jimmy’s inventions, Libby in an alternate future becomes the repressive ruler of their town, Retroville. (The town’s name is an apt one. Despite the show taking place in the present and Jimmy’s futuristic inventions, the cars, TV sets, etc. in the series all look like they’re from the 1950s/1960s.)

Another episode, “Beach Party Mummy,” sees the gang visit Egypt and stumble across a mummy’s tomb. Conveniently, said mummy is a lookalike ancestor of Libby (and former queen of ancient Egypt).

Libby’s voiced by Crystal Scales, an actress and comedienne.