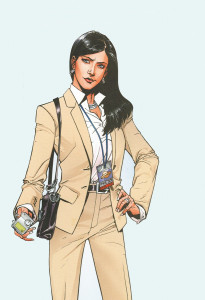 This month sees the newest crossover-du-jour at DC. This one has the regular titles replaced by various villains, ranging from A-listers like Lex Luthor and Brainiac to villains at the other end of the scale like, well, Eclipso.

More interesting is the large number of trade paperbacks out this month, including ones for Superman’s 75th anniversary this year. Not only does Superman get an anniversary volume, but Lois Lane gets one, as well! Why they waited until the fall to release these instead of June (with the release of “Man of Steel”), I don’t know, but better late than never. Though I wonder why the solicitations didn’t list Kurt Schaffenberger among the Lois Lane artists; despite the Silver Age Lois Lane stories’ tone, Schaffenberger’s probably the most famous artist associated with Lois.

The Superman and Lois volumes’ solicitations fail to distinguish between which era some stories with ambiguous numbering (“Superman” #168 for instance) come from. From what I can tell, the Lois Lane stories collected will consist of:

The selection seemed a bit too tilted toward recent/recent-ish material to me. I’d have welcomed the solo Lois or Earth-2 “Mr. and Mrs. Superman” stories from “Superman Family.” Still, not bad otherwise. Since this ran rather longer than expected, I’ll leave the Superman volume’s stories for another day… or someone else to catalogue!