It’s been a year since I bought my Acer C720 Chromebook. Last year, I wanted a more lightweight laptop versus my 15″ HP laptop, which weighs over 5 lbs (2.3 kg). I also was growing increasingly curious about Chrome OS and Chromebooks as an alternative to traditional Linux distributions. Others online, including Heather at Lectio.ca, also offered praise about Chromebooks.

So far, my Chromebook has been quite useful, as I’ve outlined in previous posts. It’s especially gotten more use recently, with my Mac Mini having some problems. I’ve pressed the Linux Mint-running HP laptop into service as a Mini desktop replacement for now, but I’ve recently noted how some of traditional Linux distros’ oddities can still be frustrating.

I’ve been using my Chromebook to update my blog, web surfing, social media, streaming audio/video, and writing. Google’s also made improvements over the past year to Chrome OS.

In terms of hardware durability, I’ve seen a few small scratches develop on the lid, to my annoyance, but it’s otherwise been reasonably durable. Granted, I haven’t dropped it or treated it roughly; I have a laptop bag/sleeve, for one. I’ve taken it cross-country once, visiting family back in Indiana for Christmas.

As for the operating system, Chrome OS, my one nitpick is its lackluster handling of reading CBZ comic files, and that’s related to how it handles ZIP files. Otherwise, Chrome OS holds up pretty well for its uses; for Linux fans, Chrome OS is a retooled/modified Gentoo Linux.

If I were buying a new Chromebook, I’d want one with a 13″ screen and 4GB of RAM, versus the 11″ screen and 2GB of RAM on the C720. As of this writing, the Toshiba Chromebook 2 would meet all of those desired requirements.

For those of you with Chromebooks, how is it working out? Also, for what purposes do you use your Chromebook?

To close out, here’s the obligatory current screenshot of my Chromebook. The wallpaper’s from the 2000s PBS Kids’ show “Fetch with Ruff Ruffman.” 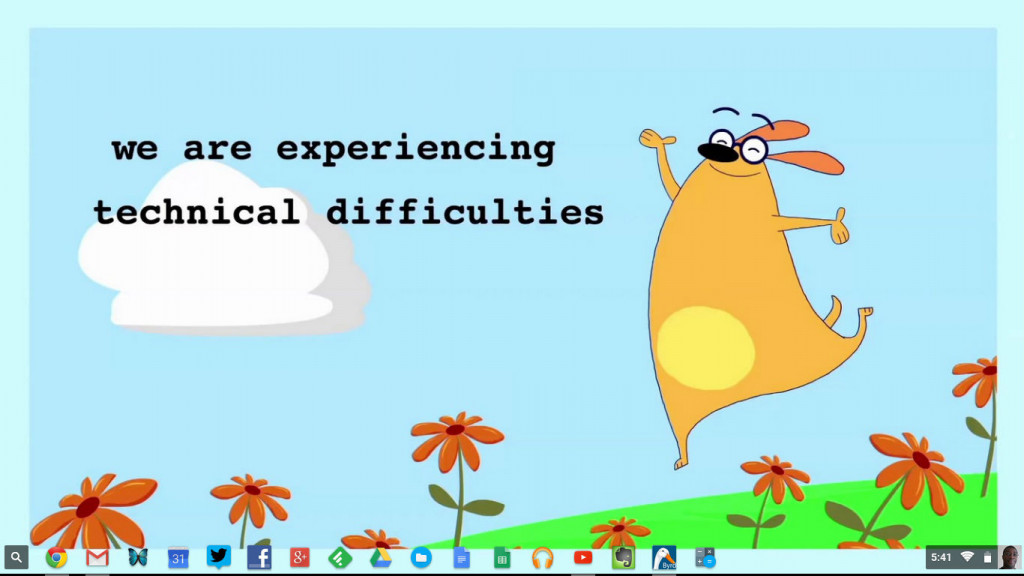