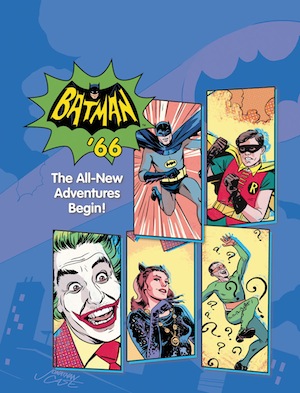 Not a hoax, not a dream, and not an imaginary story… news came today that one of the “Holy Grails” of modern home video, the 1960s Adam West “Batman” TV series, is finally being released to DVD sometime in 2014.

Oddly, the news was first announced by a tweet on Conan O’Brien’s Twitter feed… or not so oddly, as his show airs on a fellow Time-Warner-owned network, TBS.

DC Comics and a multitude of other sources have since confirmed the news:

Between this and the ongoing “Batman ’66” digital comic, plus some merchandise, this looks to be a good year for fans of the 60s TV series.

As for why it hasn’t been released to video all this time, it boils down to fighting (over money) by the various interests that had a hand in producing the TV series. Most prominently, Fox made the show back in the 60s, but Time-Warner owns the characters.

No word yet on what formats the video release will be released, beyond as the “complete series,” though I assume DVD, digital downloads, and Blu-Ray will be offered. I also assume cheaper individual season sets will eventually be released.