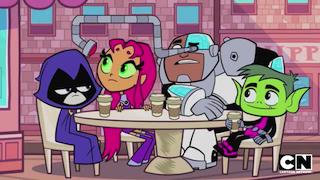 I didn’t get around to watching this episode until just now, thus the lateness of the review of last week’s episode. Yes, SPOILERS ahead…

Plot: Robin’s driver’s license is suspended (due to an accident with the Batmobile), so he takes a shady-sounding driver’s ed course to try to get it back.

Plot: Raven’s father, the evil and powerful demon conqueror Trigon, pays his daughter a visit…and (at first) turns out to be a pretty friendly guy.

This one was also amusing… parts I liked:

Of particular note is that this isn’t the first time we’ve seen Trigon depicted as a less-evil type of guy. The “Tiny Titans” comic shows Trigon as even more charismatic/less focused on villainy, willing to make pancakes for his daughter and her friends. (He also took a liking to Kid Devil, here a toddler.)

Think I liked this week’s even more than last week’s; a promising start so far for the series.