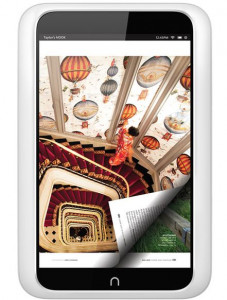 The other day, the big US bookstore chain Barnes & Noble announced that their line of Nook tablets will now be allowed to access the Google Play app store. This access applies only to the current line of tablets (the HD or HD+), not their original Nook Color or Tablet models.

One long-standing flaw of the Nook tablet is that until now, B&N didn’t allow the Nook access to Google Play, instead curating their own app store. Their own app store was limited in selection, older versions, and often charged for apps that were free from Google Play, such as Angry Birds. Since the Nook was easily rootable, however, the more geeky of us online didn’t mind much, and got around B&N’s limitations.

Of course, this was early in the color tablet era (a.k.a. a few years ago); now, with a wide selection of tablets to choose from, such as the excellent and inexpensive Nexus 7, such limited access to apps is unacceptable. While Amazon’s app store for its Kindle is much better curated than Nook’s app store, Amazon’s Kindle still doesn’t allow access to the Google Play store. This might help differentiate the Nook from its Kindle competitor.

Since the Nook’s market share is lower compared to the iPad, Kindle, Nexus 7, etc., hopefully this change will allow the Nook (which is nice hardware otherwise) to gain ground. While sideloading apps still isn’t officially allowed, as The Digital Reader blog criticizes, I don’t think the average user the Nook’s aimed at will care one bit. I recall sideloading homebrewed apps on my old Palm Pre, but only because the official apps I wanted—which was most of what’s out there—didn’t have WebOS versions.