This week, I look back at the early 1970s Hanna-Barbera cartoon “Speed Buggy.” 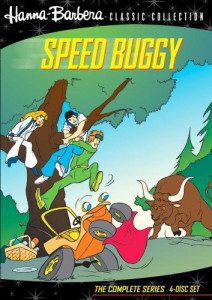 Airing on CBS from 1973-1975, “Speed Buggy” was one of the myriad of “Scooby-Doo”/”Josie and the Pussycats” clones that aired on Saturday mornings in the 70s. The series featured the adventures of a three-person pit crew and Speed Buggy, their anthropomorphic talking dune buggy.

During the 70s, Hanna-Barbera thought dune buggies were “hip” for some reason. Bamm-Bamm drove a “cave buggy” on “The Pebbles and Bamm-Bamm Show,” while the “Funky Phantom” cast also rode around in a dune buggy. The then-recent series of “Herbie, the Love Bug” films by Disney probably also inspired Speedy.

The extremely fast Speedy was entered in road rallies and auto races all over the world. This allowed the gang to visit various exotic locales. Inevitably, with each location visited, the gang would get caught up in some villain’s evil master plan (usually involving global domination) that the racers would have to thwart. A few episodes see the villains specifically seeking to capture Speed Buggy and learn his technological secrets—Speedy being, well, an anthropomorphic super-fast car and all.

“Speed Buggy” debuted in 1973 and aired as a single season of 16 episodes, with reruns airing the following season on CBS, as well as on both NBC and ABC through the remainder of the 70s, and even briefly in the early 80s. Its competition:

NBC: “Sigmund and the Sea Monsters.” A Sid and Marty Krofft production about two boys and their friendly sea monster pal, Sigmund.

The human members of the cast included: Mark, the Fred Jones-like bland-but-likable leader of the group; Debbie, the only female member of the team; and Tinker, the team’s main mechanic and inventor of Speed Buggy, who spoke in a Gomer Pyle-like voice. Tinker was capable of controlling Speed Buggy through a voice-activated remote control, though he rarely needed to use such; however, the device would sometimes fall into the villains’ hands.

Some sources online claim that Mark was Native American. However, I’ve not found anything on my own to verify such. If Mark was Native American, a typical cartoon of the era would’ve mentioned such or made it a plot point in at least one episode. However, when I went over episode descriptions, I didn’t see any indication of such an episode existing. The source of this might be from the “Speed Buggy” cast’s crossover appearance in an episode of “The New Scooby-Doo Movies.” There, Mark was animated with a darker skin complexion, but I presume it’s merely an animation error. If anyone can indicate otherwise, however, I’d be glad to hear it.

Speedy went on to appear in some other Hanna-Barbera productions over the years.

He co-starred in “Laff-A-Lympics” (on the “Scooby Doobies” team along with Tinker). Speedy also appeared in an episode of “Johnny Bravo,” and met Scooby again in “Scooby-Doo: Mystery, Incorporated.”

Speedy and the gang also appeared in an episode of “Harvey Birdman, Attorney At Law”; Speedy’s on trial for fleeing the cops during a high-speed chase. Like the other Hanna-Barbera characters on the show, everyone’s amusingly out-of-character on purpose. Mark and Debbie spend the entire episode making out, for instance.

Legendary voice actor Mel Blanc voiced Speedy. He used a similar voice to the one he used for the car Chug-a-Boom a few seasons earlier on “The Perils of Penelope Pitstop.”

Arlene Golonka voiced Debbie. Golonka is better known for her live-action roles, including on “The Andy Griffith Show.”

Phil Luther, Jr. voiced Tinker. He doesn’t seem to have any other voice or live-action acting credits besides playing Tinker.