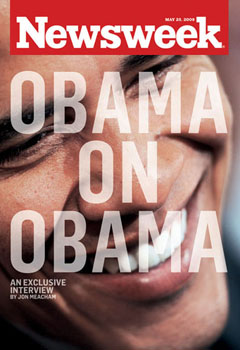 As announced last week, weekly newsmagazine (and Time competitor) Newsweek says it’ll be ending its 80-year run as a print publication, and shifting solely to online content after the end of this year.

While others blame the existence of the Web as a reason for Newsweek’s death (and ignoring the right-wing “OMG liberal media” crowd), it all seems to ignore that the major cause Newsweek’s death came from an issue of quality, not format. In recent years, Newsweek’s turned from harder news and toward a tabloid-style format, complete with plenty of fluff stories advertised on the covers. No amount of “Web 2.0” will fix this, especially with better news sources (online and offline) to turn to. Guess my pessimistic prediction from a few years ago was right.

As for the idea of whether weekly newsmagazines are dead, I’ll admit Time doesn’t have much competition left on the newsstands without Newsweek. Still, it is important to have neutral, well-researched and -analyzed stories about the issues of the day, via investigative journalism or longer-form news stories. I suppose Time, being one-half of “Time-Warner,” is better suited to the overall shift to digital, plus it (somewhat) avoided the tabloid direction of Newsweek.

Concerning the Web, unless I’m missing one offhand, I’m not sure if there’s any websites that replicate the newsmagazine experience in a way that isn’t either A) biased/op-ed-like in some way (Daily Kos, Drudge Report, etc.), B) as broadly general as Time/Newsweek are (versus specialty sites like tech sites, food, etc.), C) isn’t just an arm of a TV/radio network or newspaper (CNN’s website, etc.), or D) actually pays the writers (Huffington Post). Maybe the next online-only version of Time/Newsweek has yet to emerge? Or the weekly print newsmagazine’s just being replaced by a mix of the websites for daily/weekly newspapers, TV networks, and NPR?