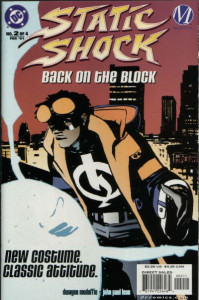 I and the rest of the comics/animation enthusiast world was surprised today by the news that Dwayne McDuffie has died, due to complications from a surgical procedure. Comic Book Resources has this nice summary of McDuffie’s career.

I was introduced to McDuffie’s work through reading the Milestone Comics line of characters when I was in high school, though I preferred Icon and Rocket over Static, not suspecting the latter would become the line’s most successful character. When “Static Shock” came to television, I enjoyed watching Virgil’s animated adventures.

Recently, I’d read some of McDuffie’s thoughts about the comics industry, per his heavy involvement in online venues. One example of his commentary, via satire, is here. Another is this anecdote about Archie’s former attitudes toward interracial dating (as recently as the 90s).