While cord cutting’s picked up in recent years, traditional cable TV’s still prominent. Research firm GfK MRI reports that 71% of US households have a pay TV subscription and have no plans on dropping it. (Wikipedia and the FCC report that the number of US households with cable peaked back in 2000.)

As for reasons why people with cable are keeping it, the infographic below lists the most popular reasons why. 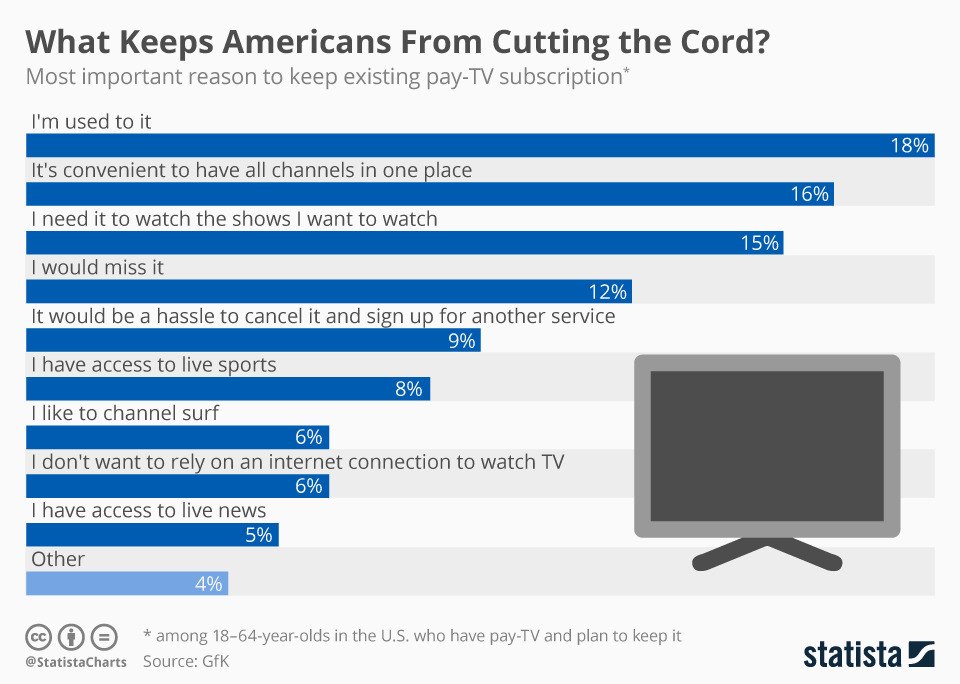 Tradition and convenience over sports?

I expected sports to be the main obstacle to cord cutting; it’s the one big advantage cable TV has over streaming. However, this survey suggests that people are keeping cable out of convenience and being used to having it.

Still, sports does rank in the middle as a factor. I wrote in 2016 about how sports make up the majority of live TV broadcasts’ ratings-grabbers.

One other factor for stalling cord cutting might be the existence of bundled services (cited as a top benefit in the GfK survey). Cable companies are also broadband providers; they often offer a substantial discount for bundling cable TV with broadband services and/or phone service.

My Comcast plan is a now-discontinued one aimed at keeping cord cutters, or at least those reducing cable service. It offers the broadcast local channels (including Canada’s Vancouver CBC affiliate), plus broadband and HBO, for about the same as what a low-end broadband package costs.

TechCrunch reports that the number of households with over-the-top streaming live TV services (such as Sling TV and YouTube TV) is now at 5% of all households, up 58% over last year.

The survey also states the largest number of people keeping a traditional cable subscription are older demographics. While 58% of respondents 18-34 are keeping cable, a whopping 78% of those 50-64 plan to do so.

Of course, for Comcast, as of 2015 they already switched to mainly being a broadband provider that also happens to provide cable TV service.