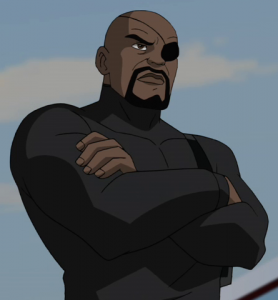 The main changes for the Ultimate version of Nick Fury include being African-American and having a personality based on actor Samuel L. Jackson’s “tough guy” film persona. Otherwise, Ultimate Nick is similar to the “regular” Nick—an eye patch, being long-lived, and being the head of SHIELD. SHIELD is the United States government’s espionage organization/law enforcement agency in the Marvel Universe.

Nick Fury’s longevity (having served in World War II) is due to having received (as an unwilling test subject) a version of Captain America’s famed Super Soldier Serum. This gave him peak human strength and endurance, along with greatly slowing his aging and thus lengthening his lifespan. (In the regular Marvel Universe, Nick Fury had taken something called the “Infinity Formula,” which conferred similar longevity/health benefits.)

The African-American Nick’s now popular enough that a version’s been incorporated into the main Marvel Universe. Some recent stories introduced the character “Nick Fury Jr.,” a until-now-unknown son of the Caucasian Nick Fury. This version ended up taking his father’s place in SHIELD. His physical appearance and mannerisms are similar to the Ultimate/movie versions of Nick.

This version of Nick Fury’s now the main one used in movies and TV. At this point, he’s also the version most familiar to the general non-comic-reading public. Of course, having Samuel L. Jackson play Fury in the Marvel Cinematic Universe doesn’t hurt.