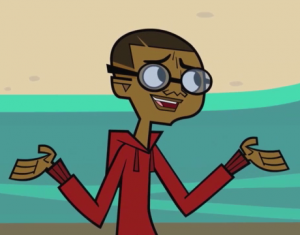 Following up last week’s post about Lightning, this week’s “minorities in cartoons” entry is Cameron, also from “Total Drama: Revenge of the Island.”

Cameron is the polar opposite of the egotistical, athletic Lightning. He’s portrayed as a literal “98-pound weakling,” having spent most of his life in a disease-proof bubble. He’s thus easily pushed around by others.

Making up for such, however, is Cameron possessing a genius intellect. During the season’s run, Cameron managed to use his intelligence to his advantage, and occasionally to help others. However, he’s still subject to cartoon-style slapstick.

His intelligent, courteous nature, a few lucky breaks, plus being seen as physically non-threatening to the others (when not taken advantage of by the assertive, athletic Jo, or manipulated by the likes of this season’s villain, Scott), probably all allowed Cameron to outlast the others, and stick around until the final two. Unfortunately for Cameron, his “final two” opponent was… Lightning, who’d developed a strong dislike of Cameron during the final few episodes. The final episode featured a “gladiator”-like battle between the two, with Cameron building from junkyard materials his own fully functional, mechanized “Iron Man” suit to use in fighting Lightning.

As noted last week with Lightning, here’s the odd part. In most of the world, including in his native country of Canada, Cameron won this final challenge, earning him the $1 million (Canadian) prize. Cameron decided since most of the other contestants were helpful in achieving his win, he’d share his prize money with them. (He’d also grown as a person to the point he didn’t need the money to fix up his bubble anymore.) However, here in the United States, Cartoon Network deemed Lightning as the winner (with no prize-money-sharing).

Each country airing “Total Drama” is allowed to choose between two alternate endings created by the show’s producers. This allows a different winner for each country, as well as hopefully reducing spoilers. However, the US is the only country as far as I know where Lightning won. Thus, it could be taken by consensus that Cameron’s the “true” winner. Still, even in the “Lightning” version, Cameron was congratulated by most of the others, and felt he’d outgrown his need for a bubble.

Kevin Duhaney voices Cameron. Duhaney’s a Canadian actor who played a Power Ranger in one of that show’s incarnations.