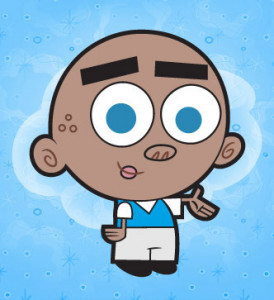 This week’s entry is A.J., a recurring character on Nickelodeon’s cartoon “The Fairly OddParents.”

Similar to Valerie Smith of the Pussycats and Mister Terrific, A.J.’s role is being the genius of the cast. As such, A.J. is the best student in his fifth grade class. Granted, this is despite having the insane fairy-hunting Mr. Crocker for a teacher.

Like another “boy genius” on a rival network, A.J. also has an elaborate secret lab hidden in his bedroom. Unlike the other “boy genius,” A.J. doesn’t seem to have any siblings, though one episode did show him building his own robot “big brother.”

A.J.’s closest friends are Timmy, the series’ star, and Chester, a poorer kid whose father’s a washed-up baseball player. Unlike Timmy (Turner) and Chester (McBadbat), A.J. apparently doesn’t have a last name.

Like Timmy and Chester, A.J. is also bullied at school by the school bully, plus Vicky the evil teenage babysitter. Also like most of the cast, A.J. doesn’t suspect his best friend secretly has fairy godparents.

A.J. was the focus of at least one episode, the second season’s “The Big Scoop!” The episode’s set during the events of an earlier episode, “A Wish Too Far.” Here, A.J. and Chester, both school newspaper reporters, investigate the source of Timmy’s sudden (wish-granted) popularity. The episode gives one of A.J.’s most memorable lines: “The Internet is for everyone and no one man can own it. I know, I’ve tried.” (The show’s running gag is Timmy writing off the stuff he wishes for as coming from “the Internet.”)

A.J.’s had two voice artists during “The Fairly OddParents’” run.

The first was Ibrahim Muhammad, who seems to have had few other acting or voice credits, and nothing listed since the mid-2000s.

The second voice actor is Gary LeRoi Gray. Gray has had various acting credits, both animated (he’s the voice of Charley on “Clifford the Big Red Dog“) and live-action (he played Brandon, Chance’s student in the Logo movie “Noah’s Arc: Jumping the Broom“).