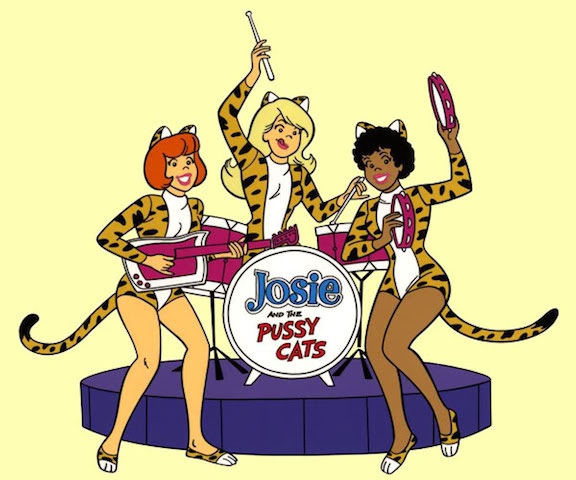 Today’s entry is about Archie’s first major African-American character, Valerie Smith of “Josie and the Pussycats.”

Several sources/media spin-offs give “Brown” as Valerie’s last name. However, Archie’s website lists “Smith,” so that’s what I’ll go with.

Josie first appeared in 1963 in “She’s Josie,” a series about the Archie-style hijinks of Josie and her friends. In 1969, Archie revamped the series, placing Josie in a rock group, the Pussycats. The book gained Valerie and several other new supporting characters. The Hanna-Barbera animated series debuted in the fall of 1970.

After their cartoon’s cancellation, Valerie (and the rest of the Pussycats) continued to appear in various Archie comics. A recent storyline saw Valerie date Archie; this led to a story set in an alternate future, where Archie and Valerie married and have a daughter named “Star.” (Star inherits her father’s red hair.) This has merited some media attention about Archie’s history of handling interracial dating, as well as its current modernization attempts.

Valerie appears regularly in the 2016 reboot of the Pussycats’ comic.

The 1970 “Josie and the Pussycats” animated series made Valerie the first Black female main character in a television animated series. On top of that, she also served as the “brains” of the group. Valerie was shown in the series often aiding the group in anything requiring scientific know-how, such as figuring out the mad scientist-du-jour’s devices. She was also shown plotting space-courses in the “Josie and the Pussycats In Outer Space” spin-off. This gave her an edge beyond just being “the Black member of the group,” and was surely quite a change in TV cartoons at  the time.

Valerie was voiced by Barbara Pariot. Her singing voice for the series was Patrice Holloway, an African-American R&B singer.

Valerie almost didn’t make it into the animated series; Hanna-Barbera initially wanted an all-white Pussycats group. After a brief standoff, they finally relented. The blog Diversity Ink delves more into this aspect of the animated series.