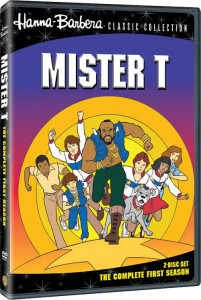 This week’s minorities in cartoons entry is, like Jem last week, another 80s pop cultural icon, though one even more famous: Mr. T, the star of the 80s action TV show “The A-Team,” “Rocky III,” and, yes, a few cartoons.

Mr. T (real name: Laurence Tureaud) and his tough guy image during the 80s became famous enough that he started to make appearances in the world of animation, often voicing animated versions of himself (or parodies of himself).

1983 saw the debut on NBC (home of “The A-Team”) of Mr. T’s own self-titled cartoon. In this Ruby-Spears produced series, Mr. T was the coach of a children’s gymnastics team, with the entire group getting involved in solving various mysteries each episode.

Mr. T would demonstrate his toughness in the way, well, only an 80s cartoon could demonstrate: for instance, the title sequence shows him swinging an alligator over his head. Also being the 80s, the gang’s pet dog had a mohawk.

30 episodes were produced, with the series airing through 1986. A DVD of the show’s first 13 episode season was released through the Warner Archive in 2011. However, the rest of the show doesn’t seem to have been collected.

Alvin and the Chipmunks

Mr. T also put in a cameo in 1983’s debut season of “Alvin and the Chipmunks,” appearing in the series’ very first episode, “The C Team.” In the episode, Mr. T helps the musical trio deal with a group of bullies.

The Chipmunks’ show, like Mr. T’s, was also animated (at the time) by Ruby-Spears, and aired on NBC.

Eek! and the Terrible Thunderlizards

Years later, Mr. T voiced the occasionally appearing character “Mr. T-Rex” on the 90s series “Eek! and the Terrible Thunderlizards.” The Thunderlizards’ half of the show featured two bumbling cavemen and the also-bumbling (20th century-like) dinosaurs tasked by their government to eliminate the humans, before they can evolve and displace dinosaurs for global dominance.

Mr. T-Rex (a Tyrannosaurus rex with gold chains and a mohawk) was an expert tracker and soldier tasked with helping the Thunderlizards carry out their task, though he wasn’t much more successful. (To a giant Venus flytrap: “You wanna play games with me, you photosynthesized fool?!”; to the Thunderlizards, after “disciplining” them: “Now fools, let’s go hunt some humans. I pity the humans!”)

Mr. T also has appeared as a cameo in Cartoon Network’s series “Johnny Bravo.” The episode “T is for Trouble” sees Mr. T try to teach self-defense to Johnny. This was in response to a letter Johnny sent as a child about a school bully picking on him; apparently Mr. T answered his letter a few decades late.

Cloudy with a Chance of Meatballs

Mr. T also voiced a police officer in the 2009 film “Cloudy With a Chance of Meatballs.” However, its sequel saw Mr. T replaced by Terry Crews, an African-American football player-turned-actor.