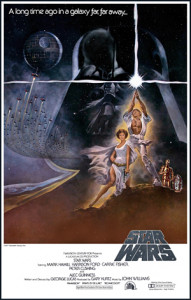 As I figured would happen, Disney’s announced it will be acquiring the license to produce “Star Wars” comics from comics publisher Dark Horse. The new Marvel-produced books (Marvel now being under Disney’s ownership), however, won’t come out until 2015 (in time for the upcoming new “Star Wars” film). The existing Dark Horse license is to expire after 2013.

That seems a bit of a wait for new “Star Wars” comics material, especially after Dark Horse having handled the comics for so long. I presume the new Marvel-published comics will tie into the upcoming film.

Marvel has had the “Star Wars” license before, though Dark Horse has been the longest-lasting publisher of “Star Wars” comics. This also keeps with Disney having (re)acquired the Pixar and Disney character licenses from Boom! Studios after they bought Marvel, though so far, they haven’t done much with either. Besides some reprints of Pixar material, there’s currently no Donald Duck or Uncle Scrooge comics (or long-running title “Walt Disney’s Comics & Stories”) being published in the US.

2014 comic sales hit a 20-year high, thanks to digital and bookstore growth

How are the Disney live-action remakes faring versus the original films?