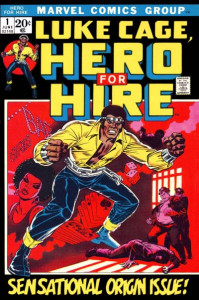 On the heels of news about Marvel’s new Muslim superheroine comes even more news from Marvel: they’ll be producing four 13-episode-each TV programs for Netflix, plus a miniseries about the Defenders that ties all four shows together. The four shows feature: Daredevil; Jessica Jones; Luke Cage; and Iron Fist.

I’m pleased to see Marvel taking an interest in offering a diverse group of characters for its media adaptions, including characters that’re fan-favorites (versus DC and Hourman). Luke Cage was long overdue for media exposure, though I wonder why they didn’t pair him up with his pal Iron Fist as a single TV show. As for the Defenders name, I assume it sounded more “Avengers”-like/impressive than “Heroes For Hire.”

Like the announcement of the new Ms. Marvel, Marvel’s also making mainstream press headlines, including “Variety,” the New York Times, and CNN. Overall, this week has brought a lot of positive press to Marvel, while DC looks decidedly weak, unimaginative and old-fashioned in comparison. (Again, Hourman?!)

Given it’s Netflix, the low-powered heroes used here should fit into a direct-to-video budget well. Hopefully the results will prove more entertaining than “Agents of SHIELD,” which I’ve given up on watching.