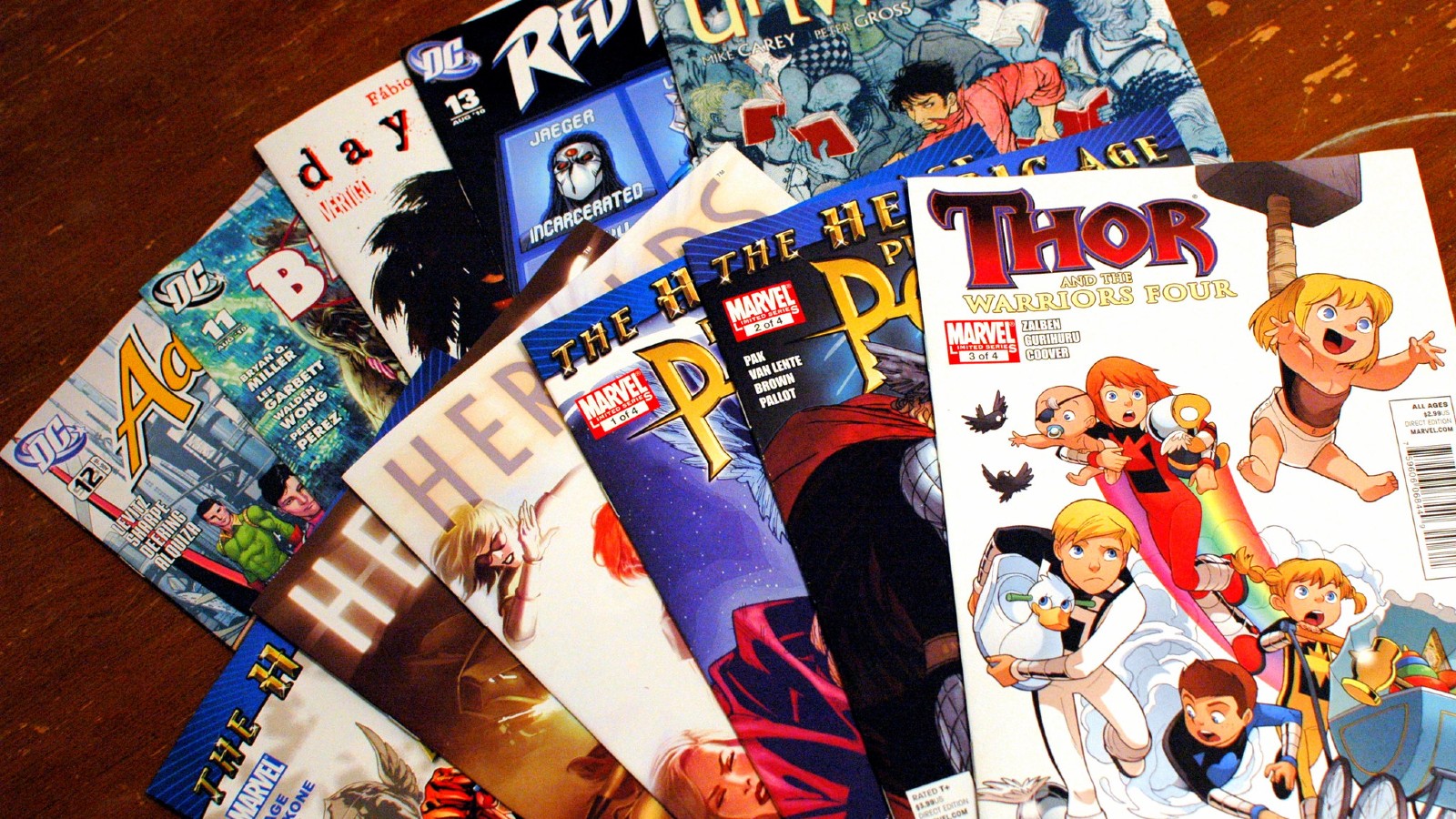 This week, I bought the newest (and long-delayed) issue of “Kevin Keller.” It shows our openly gay teen hero being heralded in-story for standing up to a mugger. Kevin also stops a pair of bullies from harassing a kid. Like other Kevin Keller stories, the message is clearly that bullying’s a bad thing.

Then I moved onto the newest issue of the regular “Archie” title. It’s a slapstick story with Riverdale’s girls trying to teach an egotistical Archie a lesson on how to treat girls better. One part, however, uses a long-standing running gag in Archie stories. Archie accidentally slams into Midge, causing a nearby Moose Mason to get irate and punch Archie hard enough to send him flying. As usual, it’s before Archie can say much of anything or explain, and despite clearly being an accident.

I guess it gets to something that’s been bugging me for awhile reading Archie. Namely, Moose’s “jealous boyfriend” shtick, and how it’s problematic and dated. In the 1950s (Moose first appeared in 1949’s “Jughead” #1), it probably sounded like an amusing-yet-noble concept: the “jealous boyfriend who’ll do anything to protect his girlfriend.”

For those unaware, Moose is the big, dumb jock of the Riverdale gang, and extremely strong. This makes him their school’s top football player. While he’s a nice guy most of the time, he also has a strong jealous streak and is quick to anger. This manifests in Moose beating up anyone who he thinks is trying to steal away his girlfriend, Midge.

Although it’s usually resident jerk Reggie trying to do such (as a running gag), Moose will beat up any guy he thinks is doing such. This has included such unlikely characters as Jughead and class genius/his in-some-stories close friend, Dilton Doiley.

On top of that, Moose prevents any other teenage male in Riverdale from talking to Midge, under threat of said violence. As a result, all the boys in town (save Reggie) avoid Midge as much as possible.

Moose’s violence isn’t just for those directly hitting on Midge. Bumping into her by accident (as Archie did), taking stuff from her (as Jughead did in one story), helping her with a school project (Moose’s first appearance had such, with a prototype of Midge standing in), or (in one story) just saying “hi” to her is enough to see Moose beat boys up.

Earlier stories tended to show Moose as quite violent in his beatings. He’d often put Reggie in the hospital in some 50s/60s stories. He also put Jughead in a cast/broken leg in an early 90s story. Recent stories have toned Moose’s violence down from “a trip to the ER,” but he’s still badly beating guys up.

My problems with Moose

As noted above, it was probably seen as a great slapstick gag in the 50s and 60s, when attitudes toward women and bullying were different. (“Kids will be kids!” “They just need to stand up to bullies themselves and fight back!”) However, times have clearly changed.

I enjoy Kevin Keller’s anti-bullying tone. However, the message rings a bit hollow if Moose gets away with mauling guys for so much as breathing near “his girl.”

Midge apparently isn’t “allowed” by her boyfriend to socialize with whoever she wants if they’re male?

For that matter, what does Midge see in Moose, anyway? He’s violent, jealous, controlling, treats her like property, and makes Ralph Wiggum look like Einstein. Some stories show he goes as far as stalking her to make sure other boys don’t talk to her. Hardly what a “nice guy” would do.

Nobody calls Moose out on his behavior

Moose’s only good traits are “he’s mostly a nice guy (when not maiming their own classmates)” and “he wins at football games.” Not exactly worth ignoring such behavior.

These days, Moose’s antics would be recorded and uploaded to YouTube/Twitter. That, or someone would call (or sue) Moose’s parents, or call the police. Odd that Riverdale’s parents don’t seem concerned about a top local high school athlete regularly beating up their kids.

Changes in attitudes toward bullying

As for the also old-time anti-bullying idea of “stand up to him,” Moose is much stronger than the rest of the cast. Thus, why the boys cower in fear/don’t even try to fight back.

Still, real life bullying attitudes have changed in recent years. School shootings and other violence have led to schools cracking down more on bullying. More attention to fighting anti-gay harassment has also led to combating bullying in general.

Yes, a lot of Golden Age cartoons had plenty of slapstick. However, the characters were usually evenly matched.

In comparison, Moose is much stronger than any of the other boys. Thus, trying to fight him’s like fighting the Incredible Hulk, i.e. a one-sided stomping for anyone short of an army.

Overall, Moose comes across as less a “likable but dumb nice guy” and more a creepy, violent bully. His shtick should probably either be resolved in-story, toned down (the approach somewhat taken these days), or laid to rest.

Archie’s modernized a lot of other elements, usually for the better. However, it feels odd that Moose’s characterization and aspects feels “stuck in the 50s,” as Archie’s occasionally accused by some.

“Life With Archie” took an interesting approach. Moose finally deals with his behavior’s consequences and cleans up his act, becoming a better person. Thus, I guess it’s possible to change. Even “Andy Capp” has dropped its earlier gags involving the protagonist and his wife physically fighting. Then again, since the Archie gang consists of (essentially) corporate characters like the DC/Marvel heroes, change can take awhile. (Update: Or maybe less time than I thought, given Archie’s 2015 reboot?)