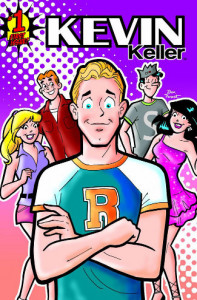 More exciting news for Archie’s newest character, Kevin Keller: he’s getting his own ongoing series in 2012. Read about the details here:

Also of interest is that we’ll get to see the adult Kevin appear in “Life With Archie,” where it’ll be shown that he’s married! No indication who the lucky guy is, but hopefully this means that the regular-continuity Kevin will be gaining a significant other as well. While I’ve figured it’s inevitable (given dating’s the subject of most Archie stories), I wasn’t sure if it’d be “sooner” or “later.” I’m guessing it’s going to be “sooner”… his own title will need his own supporting cast, after all!

This marks another noteworthy moment for entertainment aimed at American children—a gay character as the starring character in a series marketed to them. While DC and Marvel have had some ongoing series with gay or lesbian characters, they’ve made it (shortsightedly) clear that their mainstream titles aren’t suitable for children (despite marketing the same characters to kids in toys, TV cartoons, etc.). Kevin’s series, of course, will have all-ages appeal.

Archie’s given their secondary characters their own ongoings in the past, including Cheryl Blossom, class genius Dilton Doiley, and Jughead’s pet dog, Hot Dog. Thus, Kevin gaining his own title won’t be out of the ordinary. Still, I’d like to see Chuck Clayton get his own ongoing comic someday; given Chuck’s a cartoonist, it’d be fitting!