CGP Grey uses slide-shows featuring a mix of clip art and “xkcd”-style stick figures to explain various topics. The topics range from why the US should stop making pennies to explaining how the European Union works. Or how the EU did work before the Syrian refugee crisis/the UK’s Brexit vote, anyway.

The creator of the videos is an American currently living in the United Kingdom.

The Idea Channel is a PBS-run podcast that explains a range of esoteric topics. The topics include whether LOLCats and Internet memes are considered art, the series finale of “The Legend of Korra,” and analyzing the nature of expressions such as “moving the goalposts.”

The Disney Shorts channel carries a range of Disney-made shorts. These include some of their classic theatrical shorts, plus some episodes of “Schoolhouse Rock.” Prominently featured, however, are all the episodes the current series of Mickey Mouse shorts airing on the Disney Channel.

EveryAppleAd is just what its name describes. It has copies of every Apple ad produced, from the famed 1984 Macintosh introduction ad to the “I’m a Mac, I’m a PC” ads of the 2000s. The various iPhone and iPad ads are also included. 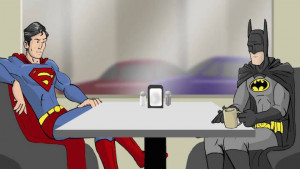 Superman here is laid back, and sometimes mention his ability to time-travel, per the ending of the first “Superman” film. Meanwhile, Batman is obsessed with finding ways to say the line “I’m Batman!,” to everyone’s annoyance. Yes, your two favorite heroes’ own films are also mocked.

Cinema Sins is a series of videos humorously covering various films. The films covered tend to be either recent ones or older ones that tie into recent films. Some of the “sins” are (as they admit) nitpicking, while others seemed to miss a few obvious criticisms. However, it’s still fairly humorous.

I’ve covered this show previously. New episodes are found on its YouTube channel.

Dtoons is a channel for animated YouTube videos. The most popular series on the channel is “Toons These Days,” a series of reviews of various current cartoons. Said reviews are done by two characters: Conroy Cat and Doggy Dachshund. Conroy’s an optimistic animated feline who enjoys various modern media. Doggy’s a cynical “old-time” cartoon dog who isn’t too fond of modern cartoons. Doggy’s reviews are usually humorous rants, while Conroy offers more nuanced reviews.

Conroy and Doggy were originally webcomic characters. Their strip featured Doggy trying to mentor Conroy on becoming a cartoon star.