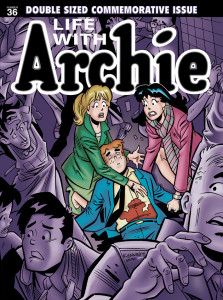 The news came earlier today, and has since spread all over social media networks, comic book sites, and even regular news sites: Archie Andrews will die in this July’s “Life With Archie” #36, which will also be the final issue in the series. In honor of the occasion, Archie plans to release various variant covers (viewable here). As fans already know, “Life With Archie” is set in the future, and follows two alternate timelines, one where Archie married Betty, and another where he married Veronica. Supposedly, Archie will die in a noble, heroic fashion, with obviously no superhero comic-style return from the grave.

Given Archie’s been trying various sales stunts (albeit well done ones) lately, along with innovative storylines, it’d probably make sense to go for the ultimate stunt, as Marvel and DC have done: killing off your company’s star character. Unlike Superman, “Life”‘s version of Archie won’t be coming back from the dead, and this is probably the last we’ll see of this version of the characters. However, I’d love to see four imitation redheads running around Riverdale in a story called “Reign of the Archies”…

I’m disappointed to see that “Life With Archie” is being cancelled. I wonder if the novelty’s worn off, or if the magazine format didn’t do as well as Archie hoped. The latter would be supported by the proposed “Veronica & Betty” magazine never getting off the ground, with its storyline being folded into the upcoming regular “Betty and Veronica” comic. I suppose the regular comic sized “Afterlife With Archie” has also grabbed more attention among comic readers than “Life.”

I guess it also confirms that “Life With Archie”‘s future isn’t exactly the same one as “Archie Marries Betty”/”Archie Marries Veronica,” the storylines that kicked all this off in the first place. Those ended with the couples in each timeline living “happily ever after,” complete with kids. Not that kids aren’t possible here, but it’s definitely not a happy ending for “Life.” Of course, “Life” was also a more melodramatic/soap opera future versus the “Archie Marries” ones anyway… again, Miss Grundy’s still alive in the latter, but not the former.

Finally, while continuity’s a loose concept in Archie comics, it’s also safe to assume “Life”‘s future isn’t part of the same future timeline of January McAndrews, Archie’s 29th century descendant in the early 90’s “Jughead’s Time Police” series. Though we could see Betty or Veronica being pregnant when the finale happens, or January could be a descendant of a cousin of Archie’s, such as his older cousin Andy Andrews from the “Man From R.I.V.E.R.D.A.L.E.” storyline a few years ago.