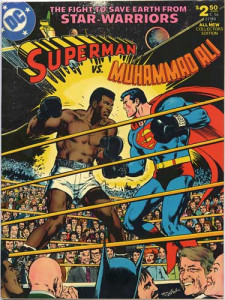 You might recall the controversy over Orson Scott Card writing for a few issues of a new digital-only Superman comic. Since the news was released, there’s been various calls for boycotting, etc., with the news making it even into non-comics media (NPR, LGBT magazine “The Advocate”). Today, DC Comics finally responded to “The Advocate” (and Fox News):

When The Advocate reached out to DC for an official comment, a company spokesman said, “As content creators we steadfastly support freedom of expression, however the personal views of individuals associated with DC Comics are just that — personal views — and not those of the company itself.”

Rather poor public relations to me—most conglomerates would’ve tried to throw out a line about how they’re “sensitive to the needs of our fans/LGBT readers/etc.,” or cite their gay and lesbian characters such as Batwoman (who headlines her own comic/has won GLAAD awards). But instead, they basically dodged the issue and wrote it off as just Card’s “personal views.”

While that may be the case (and DC can hire whoever they want), it doesn’t make for a good public image to sign a highly outspoken homophobe (who’s doing way more than just voicing his opinion) onto your second-highest-profile character (after cash-cow Batman), especially one who has a new movie coming out this summer. Never mind the general public’s view of superhero comics these days is likely either as: the modern equivalent of buggy whips; something that’s only aimed at “geeks”; or just as the source material for the “real” versions of superheroes, the movies/TV shows/video games. Throw in the equally “stellar” sales figures (100,000 copies is a “top-seller” out of 300 million Americans?!), and one would figure DC Comics would want to at least try to project a more welcoming image, among other much-needed changes to their (in my opinion) broken business model. But I guess not…

As for whether it’ll sell, I’m sure the issue will do well (“well” in the above-mentioned “100,000 copies = a hit” sense) despite the controversy: people curious about seeing what the fuss is about; the usual sales boost of a #1 issue; and fans in various comics forums who’ve made clear they either don’t care or side with Card’s views.

I also note that the PR statement refers to themselves as “content creators” and not just “comic writers/artists/etc.” I suppose it supports my theory that Time-Warner (and apparently now DC themselves) just see their assets as an “IP farm” for more lucrative movies, etc. instead of primarily as comic characters.